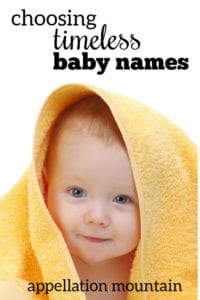 I’m a Jessica married to a Josh. Our sisters and brothers have super 90s names, too: Rachel, Eric, Heather. Now all the kids we know are Liam, Logan, Landon, Ava, Evelyn, Olivia. I know that this is normal. But it feels … boring? Repetitive? I’m not sure, but I’d like to avoid it if possible. We both have a cousin named Madison Marie. How does that even happen?!

We’re due with our first baby this spring. We won’t be finding out gender in advance, but we’d like to have more children in the future, so we don’t mind having a few favorites picked out.

Where do we start?

Congratulations on your first! It’s an exciting time.

Where do you start? You already have!

So often we don’t recognize that names are subject to trends. I’ve heard parents of kids with Top Ten names say – sincerely – that they didn’t realize a name was so popular. This was especially true pre-internet. But even today, it’s very possible to miss things. Parents might find Sophia different, if they’re comparing it to the names of children they knew growing up.

Knowing what you know, I think there are a few directions to consider:

Choose a rock-solid classic of a name.

Elizabeth, Peter, Louise, Henry. Yes, your child might have to share the name, possibly with a future teacher or somebody’s uncle. But if what you’re after is a name that can’t be carbon-dated to the year 2020? Then classic girl names, like Alice and Ruth are rich with potential. So are classic boy names, from Adam to Vincent.

Find a name holding steady in the rankings.

Open us the US Social Security Administration site. Now find the current Top 1000. (As of this writing, that’s the year 2018. 2019 data drops in May.) Look for names you like starting around the 300 mark to maybe the 500s or so. Maybe Malcolm, Dante, Donovan, Julius, Seth, Dalton, Gregory, Leland, Grady, or Hugo for boys. And for girls? Miriam, Laura, Veronica, Daphne, Willa, Helen, Blair, or Celeste. I’m choosing at random, but you get the idea – names everyone recognizes, but aren’t heard everywhere. Next, check the names you like best against the last few decades.

Names like Malcolm and Celeste have never been wildly popular or obscure. Odds are strong they’ll stay that way, bouncing around the 300s and 400s for another few decades while your kiddo enjoys being the only one in a crowd.

Trust me. We call our daughter Clio, a rarer-than-rare name, never in the US Top 1000. But reverse the sounds, and Clio is Chloe, a recent chart-topping favorite, guaranteed to be mixed up with our child’s name forevermore.

Some of that is unavoidable. But what you can and should consider is spelling and elaborations. A name with only one likely spelling, like Julius or Daphne, is likely to feel much less popular than a name like Zayn (Zane, Zain, Zayne). And Sky is relatively uncommon, even with the spelling Skye factored in, but then consider Skylar, Skyler, and Skyla and that changes quickly.

Acknowledge that a great name may not stay a secret forever.

Popular names catch on because they’re great names. Maybe it seems like Donovan is just exactly right – a stylish sound that is falling slightly in popularity and makes your heart sing. But then, shortly after your Donovan turns six, a white hot television series debuts with a hero called – yup! – Donovan. Suddenly people are asking you if you named your son for the series, even though that would require psychic powers and/or time travel.

Know that your Donovan will at least be headed to middle school before a wave of little Donovans catch up. There’s some comfort in being ahead of the curve.

Even a #1 name is less popular than it was in prior generations.

In other words, a name barely in the Top Ten in 1990 would’ve been more common than any of today’s #1 names. 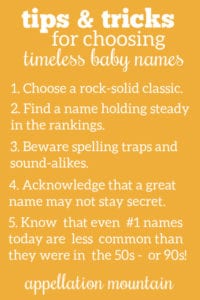