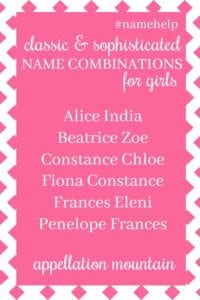 I’m completely exhausted and confused trying to name my baby girl due this May. We only have a few weeks left!

We have a son named Nicolas Alexander, called Nico, and if we have another boy we would name him Oscar.

Ideally, I would love to find a name that works in both English and Spanish as we have a double-barreled last name. We’re also Greek and Italian.

I like classic names with a bit of an edgy/vintage feel.

Most of the names on our list are family names, which would be nice to include but not totally necessary: Josephine, Penelope, Alexandra, Beatrice, nickname Bizzy, Alice, Sofia, Emma, Zoe, Naomi, Simone, India, Francesca or Frances with the nickname Frankie, Fiona, Florence, Sara called Sadie, Chloe, Constance, Madeline, and Eleni.

My husband and I both have N names, as does our son. Is it a mistake to drop the N theme? It wasn’t intentional.

Right now Beatrice, Frances, Constance, and Penelope are my top first names. (At least today!) I still like Alice, too!

Let’s address the N question first. I think Naomi works well with your criteria, but I do think it’s smart to worry about the shared initial. There is absolutely no rule that says Nico + Naomi can’t have a brother named Oscar. But how would you feel about it? Do you think you might feel compelled to keep going with the Ns? If the answer is yes, then you’re wise to move on now.

Of course, vintage is a big category, spanning elaborate, romantic names, like Francesca, as well as more tailored choices, like Frances. From the names on your current favorites list, I’d say that the latter seems like the better bet, at least for this child.

Because you’ve got lots of great name options, let’s dive right into combinations and see if we kind something that clicks when it’s said together:

Alice India – You’ve mentioned that you love Alice, but might find it a little predictable, while India seems rather bold. Could they be perfect together? It almost sounds like one long, flowing name smooshed together: Alisindia. But I don’t think that’s a bad thing at all.

Beatrice Zoe, called Bizzy – This is just plain fun! Zoe has a great meaning, it’s a family name, and it helps reinforce the nickname Bizzy. (Though, really, Beatrice could just as easily be Bizzy with or without the middle initial Z.) Zoe is Greek; Beatrice is Italian. And they absolutely work in English and Spanish. It hits all the notes!

Constance Chloe, called Coco – Could Coco be just the nickname to spice up traditional Constance? Constance Chloe appeals to me, because, like Beatrice Zoe, the middle name serves to reinforce the unconventional nickname. But Nico and Coco do share a lot of sound, so maybe that’s a non-starter?

Frances Eleni, called Frankie – Frances is such an international name that it can be imported into Spanish and Italian without difficulty. Eleni is delightfully Greek, but also has the same ability to cross linguistic borders. And Frankie is a spunky, upbeat nickname name that’s quite current for girls today without feeling at all common. I feel like the next high-end children’s boutique I visit is going to be called “Nico + Frankie.”

Penelope Frances, called Polly – The challenge of Penelope is which nickname to use, right? There’s no shortage of options, but I wonder if Polly appeals? I know Poppy probably isn’t an option because it’s too close to the Spanish for father – papi.

I love so many of these, I’m not sure I can pick a favorite. If Coco weren’t so close to Nico, I think Constance Chloe might top my list. And if there were a Penelope nickname you loved, that might move up the list, too. But I keep coming back to Beatrice Zoe, Bizzy for short.

Readers, I know you’ll have some great suggestions. From Nancy’s long shorlist, what would you combine for a girl’s name. Nickname suggestions welcome, too!