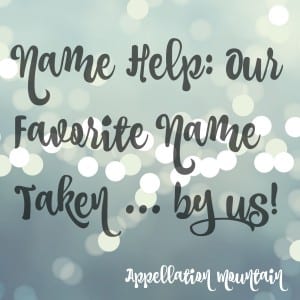 My husband and I are struggling with naming our next baby girl because we used our top two names for our first daughter!

I was pretty adamant that our 2 1/2 year old daughter was destined to be an Izzy. We finally named her Izabella Alanna when she was three days old because I wanted Izabella/Izzy and my husband wanted Alanna for her first name.

Well, we’re having another baby girl in early 2016 and the only name we both LOVE is Alanna!

I’m tempted to just name this baby girl Alanna, since we both adore the name. But, of course, we have naysayers who say we would be unjustly taking Izzy’s name from her. We’re so torn!

We really want our second daughter’s name to go well with her big sister’s. Yet not be too common.

My husband also likes the name Natalia, which I don’t love or hate, although I do dislike the nicknames Nat or Nattie.

I like the names Gianna or Kayla, but neither seems as perfect as Alanna.

The other name we are both considering is Fiona. But again, it doesn’t seem quite right and doesn’t have appealing nicknames. Maybe good for a middle name?

I love the idea of calling this little girl Alanna, or Allie or Lana or Lan for short. And what would be a suitable middle name?

I’d really like to hear people’s thoughts on using one child’s middle name as the next child’s first name … and permission to do so!

Other suggestions are also welcome. We tend to like lyrical names, like Keilani or Leilani or Alanna. We also both have Irish and Italian heritage, if that makes a difference.

Please read on for my response, and leave your thoughtful suggestions in the comments!

Oh, I’ve had this conversation!

We initially planned to use our second favorite name as our son’s middle. Except. If we had another boy, I knew we might want to use it as a first. And so we didn’t use it. But we had a girl instead. So now the name is likely to languish unused – and we absolutely could have stuck with it!

But enough about me.

I am completely torn on your question.

If I were the younger sibling, I think I would dislike having a hand-me-down name. Maybe quite a bit!

But I do think there’s something to be said for using the name that you love, and you do love Alanna.

Another reason to use the name Alanna? It sounds like a sister name for Izabella, doesn’t it?

Let’s have a poll:

My guess is that the results will favor choosing a different name for your new daughter. And I do think it’s worth exhausting every possibility before you use Alanna again.

So let’s see what we can come up with:

Delilah – As lovely as Izabella and Alanna, but just different enough.

Alaina – Izabella Alanna and Alaina MiddleName might be very close, but it’s not actually the same name. If Alaina doesn’t seem like enough of a departure, you could spell it Elaina or Elena.

Susannah – It seems like you’ve considered lots of other ends-in-anna names and they’re not quite for you. But Susannah popped into my head for two reasons. First, it’s a long, lovely ends-in-anna name that no one ever considers. But second, just like Izabella is a spin on Isabella, you could easily use a ‘z’ form of Susannah – Suzanne, or even Suzanna, maybe?

Alena, Alina – Another not-quite-Alanna name that I think might work well.

Louisa – Fiona reminds me of Louisa, only with nicknames galore – Lou, Lulu, and Lucy are the obvious possibilities. There’s also Lucia, which I think would work beautifully, too.

Kaia – I’ve saved my favorites for last! First, you mentioned Kayla, but said it doesn’t feel quite right. That might be because Kayla has been around for a while – it started catching on in the 1980s, boosted by a popular soap opera character and the rise of Kaitlyn. But Kaia is fresh and interesting, and has roots in Hawaiian. You’ve probably heard of Kai, meaning ocean.

Alani – But here’s my most favoritest of them all! Alani is another Hawaiian name, meaning orange tree. It’s midway between Alanna and Leilani, and seems like a logical fit. If you think it’s still too close to Alanna, there’s also Eleni, the Greek form of Helen, cousin to Elena – which takes us back to an earlier suggestion.

I think any of these would be a great substitute for Alanna, but if none of them grab you, I have one more thought.

It’s a little wacky, but what if you used Alanna as the middle for your second daughter, too? Only instead of calling her Kaia or Natalia or Fiona or whatever you settle on for her first name, you could call her Alanna instead.

Wacky, right? But it’s a possibility if you still want to use Alanna, but worry that it would take away something from your older daughter’s name.

Overall? It’s not the end of the world to repeat Alanna. But I honestly would exhaust every name possibility to make sure that there’s not an alternative before I duplicated my firstborn’s middle name.

Readers, what would you say to Kelley? Do you think they should just use Alanna again? Or can you think of some names that might appeal instead?