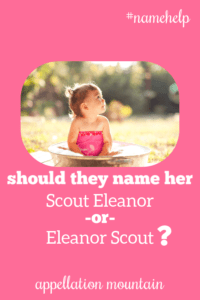 Ever since we started trying for a family, I had one name in mind for a daughter: Scout. I like it because of the Harper Lee character, but even more because my husband earned his Eagle Scout award, as did my brothers, and I was a Girl Scout for many years, so it was very important in both of our families. And it’s everything my name is not: there’s one spelling, it’s strong, and it’s not trendy.

Now, after a long journey, our daughter will be here in a few short weeks. There’s no question we plan to call her Scout. We’d settled on Scout Eleanor, Eleanor from my husband’s grandmother. (She died before we met, but Eleanor Roosevelt makes me love it, too.)

But lately I’m wondering – should her first name be Eleanor? My sister – who I love, but don’t necessarily share the same taste in names – is trying to talk me into this approach, because she worries that her niece will “outgrow” Scout. (Jean Louise did, right?) I’ve asked other friends, and reactions are mixed.

My husband sort of shrugs it off, and says whatever I decide is fine. Except I can’t decide!

Any advice is welcome.

This is one of those questions that elicits strong feelings. Some parents will insist that it’s a Horrible, Dreadful, Terrible mistake to put anything other than your child’s everyday use name on her birth certificate. They opt for Maggie instead of Margaret, and short, simple names like Ava and Claire.

Other parents feel every bit as strongly that Formal Names Matter. They debate the possible nicknames for Josephine, or worry that Scarlett doesn’t have any good short forms. Denying our children a longer name, they contend, is to make their path to the bench of the Supreme Court that much more difficult.

The hard truth? There’s no right answer. As tempting as it is to declare formal names a must, or nicknames needlessly complicated, the truth is that both approaches work just fine. Both have their drawbacks. (Maybe Maggie tires of being asked if her name is short for Margaret, just as much as Posy dislikes explaining that she’s really Josephine. There’s no way to know.)

Your sister is arguing that Scout doesn’t stand up as a first name – it’s too insubstantial, a nickname that might hold your child back from future accomplishments.

No parent would bestow a name with that intention, so I understand your anxiety.

And yet … I think your sister is wrong.

Let me break it down:

We are living in the Golden Age of word names. Might some adults raise an eyebrow at a child name River or Reign or Scout? Sure. But these names continue to gain in use, along with so many other word names – like Scout. That means that a child named Willow or Journey today will experience their name as normal, and as their generation ages, so will everybody else. Because …

All names age with their generation. We can’t imagine a Supreme Court Justice named Madison because, in our experience, the average Madison is a teenager. (Though actually, Madison reached the US Top 100 in 1993. Plenty of Madisons are full-fledged grown-ups by now.) Fast-forward to, say, 2043, and Madison will be the name of many women of accomplishment in all fields of endeavor, just like Melissa, Susan, Jennifer, Michelle, and Amy are today. All that’s required is a few more decades. And so it will go with all sorts of names in use today – Sadie and Scarlett and yes, Scout.

The formal name versus everyday use name is based entirely on personal preference. There are no rules when it comes to naming. Maybe some guidelines and good advice, but rules? Nope. Some of us like Clarissa and Aurelia, while other parents pick Quinn and Sloane. For every parent who argues passionately in favor of Eleanor Scout, another will insist that Scout Eleanor is the way to go.

It’s like asking a group of friends to pick a paint color for your bedroom. You love them all, and you’re grateful for their opinion … but when the sun sets, you’re the one who has to sleep in that room with the charcoal/chartreuse/peacock walls, so you’d better love it.

My sense is that Scout is your daughter’s name. You hadn’t considered Eleanor as a first name until your sister mentioned her misgivings – but they’re her misgivings, not yours. This is the name you’ve loved for a long time. In short, I can’t think of a reason in the world to change your plans now.

Still, let’s have a poll, because if you really are down to a coin flip on this one, it’s always interesting to see what the community says.

Let’s hear it, reads: Should Linsey stick with Scout Eleanor for her daughter, or reserve the names to Eleanor Scout … called Scout?