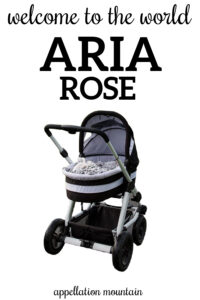 Update: Thanks for all of the kind words and support. We welcomed Aria Rose on September 7th. Last week, my sister-in-law gave birth to her third – and it’s a BOY! They named him Liam James, and I am SO SO SO glad that I stuck to our favorite name and didn’t get bullied into changing it.

My sister-in-law and I are both due in the next few months. I’m due on Labor Day. (Ha!) And her due date is mid-October. This is our first child, their third.

When we first realized we were both due around the same time, I asked if she wanted to talk about names.

I should add that my husband is happy to let me take the lead in naming.

My nieces’ names are two of my favorites: Isla and Eden. Obviously, I wouldn’t use my nieces’ names, but I was worried that whatever name we’d choose for this baby might also be one of her favorites.

But she flat-out refused, saying that she doesn’t talk about names with anybody except her husband, no matter what. She made a comment about name stealing, which was sort of mean, but I let it go.

By now, my husband and I have chosen the name Aria, and we aren’t really keeping it a secret. My aunt had a music theme for the shower, and had Aria’s name on a banner in the back yard. I’m a music teacher, and my husband and I met at a concert. It’s perfect!

When my sister-in-law walked in, though, she was clearly upset. Towards the end of the shower, she took me aside and told me that Aria was their name for this baby if it was a girl, and she was really sorry, but I’d have to choose something else.

Someone else approached us before I could react, and then my sister-in-law left. But since then, me and my husband are both getting texts telling us we should choose a different name, because this is the only one they agree on, and it’s so much harder when you already have kids and have to be careful not to repeat an initial, etc.

Does this sound as crazy to you as it does to me?

My husband doesn’t want to argue with his brother, and at first he didn’t see what the big deal would be about choosing another name. I asked him if he’d feel that way if our daughter was already born, and he said “of course not!” And that sort of brought him around to seeing it my way.

How do we handle this?

But … I think your daughter is already named.

Let’s look at the facts:

You know you and your sister-in-law have similar taste in names, and tried to talk it out ahead of time. She declined – which is completely her prerogative! But you made the effort. What you did not do was agree to revisit the conversation at any future point, up to and including your daughter’s kindergarten graduation.

You know you’re having a girl. Your sister-in-law might still have a boy. Again, totally her choice. And really, it doesn’t change anything if you both knew you were having daughters. But it does make her request a little more outlandish, doesn’t it? After all, there’s a 50% chance that she wouldn’t use the name Aria, either.

And if you don’t use it, there’s no guarantee she WILL. I agree with your brother- and sister-in-law – naming children does get harder as you grow your family! But while you’ve committed to Aria in a very public way, she has not. After all, she’s not saying that this is a family name, or the only name she’s ever imagined naming a daughter. (She didn’t choose it for either of her two previous pregnancies, right?) So even if she does have a daughter in October, she might decide to name her Autumn or Luna or, well, any other name.

When it comes to name conflict, my advice tends to be: choose the relationship, not the name.

So I completely understand your husband’s reaction. A name isn’t (usually) worth a squabble.

But there’s a caveat.

Both parties have to be willing to take this approach.

I’m not hearing that from your sister-in-law.

Is it possible that she’ll reflect and get to this place?

If I were in her shoes, I’d feel surprised and disappointed. But, thinking it over, I’d have to concede that it’s not up to me what you name your child … and admit that I can’t say with 100% certainty that I’d be using the name Aria anyway. (I mean … it could be a boy!)

From your perspective, I think you have to proceed as if the ink is already dry on your daughter’s birth certificate.

That’s going to be uncomfortable, but I don’t see another option.

I’d be inclined to say something like: “We’re committed to naming our daughter Aria. I’m really sorry this is taking you by surprise, and I know how hard it is to choose the right name.”

And then decline to talk about it any further.

Because to answer your original question? Yes, it is completely bananas to think that you should have to give up your daughter’s name under these circumstances.

In the extremely unlikely event that your sister-in-law goes into labor six weeks early? Then it’s possible you’ll be the one in the uncomfortable position.

It’s perfectly possible that the cousins could simply both be Aria. After all, Aria has ranked in the US Top 100 since 2012. Any Aria can reasonably expect to meet another girl with the same name. (Or Arya. Or Ariana/Arianna.)

In fact, if your sister-in-law wrote to me, I think that would be my first question: are you so close that two cousins sharing a name would cause daily confusion? My guess is probably not. If that possibility bothers you, though – that your daughter and her cousin would both be Aria – then maybe it’s worth considering another option.

So your daughter is named – congratulations! And it’s up to your sister-in-law to decide how to proceed.

Readers, any advice for Megan?