I’m sure you’ve heard this a zillion times before, but my husband and I cannot agree on a name.

We are expecting our second, a girl, in January. Our first is a boy, named Tom Lev after my grandmother Tmima Liberman. It means ‘pure hearted’ in Hebrew.

I am Jewish with an Israeli background. My husband has Irish roots and is from the Midwest. Ideally, we would find a name that has meaning in both Hebrew and Gaelic.

So far we have come up with:

Please read on for my response, and leave your helpful suggestions in the comments! 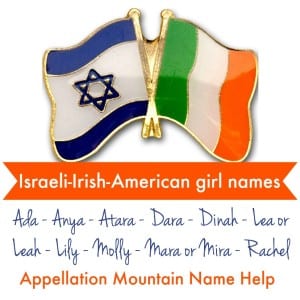 Choosing a name that works in more than one language and culture presents a certain set of challenges. On the flip side, it’s an opportunity to find a name that is uniquely meaningful for your family – just like your son’s name!

Let’s take a look at your preferences for a daughter’s name:

Sometimes parents are hoping to find a name that is nearly identical in two separate languages. That’s not impossible, but it can be limiting. I think you’re right to look for something that works for both heritages, but are taking a more flexible approach.

Ada – You seem to have a preference for shorter names – Ava, Tom, Lev. And so I wonder if you’d consider Ada? In Hebrew, it means adornment, and reminds me of several names used for girls in modern Israel: Adira, Adina. Strictly speaking, it isn’t an Irish name. Ada’s other roots are Germanic, where it means noble. But it should be familiar in Irish, and I found a mid-nineteenth century actress called Ada Dyas, who found success on the stage in London and New York. There’s also Ada Lovelace, who makes a pretty fabulous namesake.

Anya – It’s a possible phonetic spelling of Áine, which means radiant. In myth, Áine was queen of the fairies. Anya and Áine are also considered forms of Anne. Anya makes me think of Enya, as in the singer. Altogether, it’s a definite Irish heritage choice. While it isn’t expressly Hebrew, I suspect it would be reasonably familiar in Israel today, if only because it is so widely used in Europe.

Atara – Is this a little bit too out there for you? It caught my eye because I think of Tara as so very Irish – though, of course, that’s more to do with Gone With the Wind! Still, Tara has been popular in Ireland as well as the US. But Atara is a Hebrew name meaning crown.

Dara – Dara is a truly international name, with several possible origins and meanings. Some of those origins are Irish – and one is Hebrew! Tom and Dara sound like siblings, and while Dara has never been common in the US, it’s certainly recognized as a given name.

Dinah – Dinah is a Hebrew name, given to the daughter of Jacob and Leah in the Book of Genesis. I don’t know how common it is in Ireland, but there’s a strong Irish heritage connection. The traditional folksong “The Holy Ground” begins with these lines: Fare thee well, my lovely Dinah. A thousand times adieu. We are bound away from the Holy Ground and the girls we love so true.

Lea, Leah – Another name from Genesis is Leah. It’s not common in Ireland, but it’s not unknown. It’s written without the final ‘h’ in Irish versions of the Bible. Singer Leah McFall is at least one Irish woman with the name.

Lily – Lily is quite popular in Ireland today, and while it isn’t familiar as a given name in Hebrew, a name with the same meaning is: Shoshana. I love Shoshana, or even better, Shoshannah. But with a short, nature-related name for your son, I think Lily would be the better choice.

Molly – You could’ve knocked me over with a feather when I found Molly listed in Kveller’s Baby Name Finder. Molly seems like the ultimate Irish girl name to me – blame James Joyce, I suppose. But it was also used by many Jewish immigrants to the US, probably through a process like this one, transforming Rywka to Becky. I’m not sure if that makes Molly an acceptable name from your family’s perspective, but I think it’s worth consideration. Other short

Mira, Mara – If you’re looking for something slightly less common, how about Mira? It has roots in Hebrew, where it means rising water. But it also comes from the Slavic element miru – peace. Mara is a little more conventionally Irish – the surname O’Mara is familiar. But I think either name makes for a culture-spanning possibility.

Rachel – Because you have Isobel on your list, I was tempted to find another ends-in-l option. The only one that seemed well-used in Ireland, while having definitely Hebrew roots was Rachel. The name means ewe, which gives both of your children’s name reference to animals – the lion and the lamb! That’s rather poetic. I do think Rachel is one of those frills-free names that isn’t exactly exciting or style-forward. But that’s it’s strength. Without being as classic as Katherine, Rachel is an enduring choice.

I think Ada is my favorite. It’s less common than Ava, and there’s lots of history and meaning layered on the name. It’s feminine, and pairs well Tom. The meaning – noble – is great, too. Ada Lily, maybe?

Readers, what would you suggest as a sister for Tom Lev? Are there some great Hebrew-Irish crossover names I’ve overlooked?