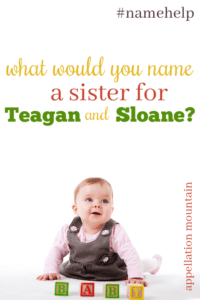 We have two daughters, Teagan Mary and Sloane Melissa. Our third daughter is due early in the new year, and we’re not coming up with a name we can agree on.

I offered it as a middle name, but we like the idea of all of our children having M middles, because we both come from M families.

Names we considered for our older daughters include Hadley, Darby, Quinn, and Payton. My new favorite is Delaney, and I also like Parker and Emerson.

Our last name is three syllables, starts with W, ends with -r, which is why we’ve never seriously thought about Harper or Piper, though I’m beginning to reconsider whether that’s really as big a deal as I thought it was.

Would love to get some new ideas for names that we can both love.

Here’s the challenge: no name, no matter how perfect, will solve your current dilemma. Your problem comes down to this: he says Ellen. Your response? No, not Ellen.

There’s no reason Teagan and Sloane couldn’t have a sister called Ellen. It’s a different style – demure and classically feminine, instead of the bolder, unisex choices you made for your older daughters. Would others remark on it, maybe even guessing (correctly) that it’s a family name? Maybe. But none of that means you can’t use it.

What does matter is that Ellen doesn’t sound like your daughter’s name, and that means it really has to be off the table.

That leaves a few options:

My sense is that #2 or #3 feels far more like a compromise that the first approach. It’s where you’re stuck, right?

Happily, I think there are tons of possible surname-style names with a strong El- sound.

Ellery – Because Delaney is your frontrunner, maybe another three-syllable, ends-with-y name that starts with the Ell- sound makes for the best of both worlds?

Elliot, Elliott – We tend to hear them as boys’ names, but Elliot – one T or two – originated as a surname, based on the Biblical Elijah. Writer George Eliot spelled it with a single L and T, but that’s quite rare today. While it’s more common for a boy, all spellings are seen for girls, too.

Ellis – Like Elliot, Ellis also comes from Elijah. It might be the closest option to Ellen, requiring just a tweak of the ending sound to make it a sister for Teagan and Sloane.

Ellison – Because Emerson is on your list, how about Ellison? It reminds me strongly of Allison, which is probably one of the reason it’s fared well for girls in recent years.

Now, about your -r ending question: I don’t think a name like, say, Piper Hunsaker is a deal-breaker. In fact, they can be rather memorable. But I’m not sure any of the El- options work well. There’s Ellender – which means newcomer. It’s the middle name of actor Blake Lively. But, in this case, I think Ellender Hunsaker – two three-syllable names, both with an -r ending – do sound a little awkward.

So let’s go back to the names I’ve suggested already. Ellison came to  mind immediately, and I think it’s still my favorite.

But all four of these are rich with possibility, and there may be others I’ve neglected, too.

Readers, what would you suggest to Melissa for Teagan and Sloane’s sister?