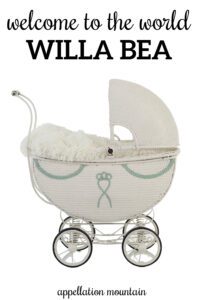 We loved Clara, but it doesn’t work with a strong K sound in our last name. Up until the last minute, she could have been Tessa, Nella, or Lola (love this name!) but when she was born, we fell in love with Willa Bea. I wasn’t sure about wallaby at first, but as soon as she was in my arms, it seemed like the sweetest nickname. And it is! Thank you so much for all of the help. – Holly

Our second daughter is due on Christmas Eve! Her big sister is Gemma Lou. It’s the perfect name. We have a hyphenated last name for a grand total of five syllables, so we wanted short and easy. But not common. Of course! Just like everybody else, we wanted to be different. 😉

We thought of Gemma in one single conversation. And I wondered how it took couples so many weeks to find a great name. Well – ha! Karma!

The names we like are either too long with our surname – Eloise, Juniper, Josephine – or I know one already – Isla, Stella, Ruby. We do like Georgia, but my partner comes from a family where all the siblings have the same first initial, so another G name is a no.

It seems like all we know is what we don’t want, but I’ll add one more: no Christmas names. I get asked sometimes if I was born at Christmas. (My birthday is in July.) So I don’t think I want my daughter to be Ivy or Winter or Snow. (Or maybe it wouldn’t be so bad, because she could say yes when people ask her?)

Lou comes from names in both of our families, first and last. We’re thinking about Bea/Bee for this daughter, for similar reasons.

Congratulations on your new daughter! Gemma Lou is perfect.

So we need short, sparky, and (probably) nickname-proof. Almost certainly not Top 100, but also not too unusual. For reference, Gemma ranks #198 as of 2019.

Ideally, it will work with the middle name Bea/Bee, too. That part tripped me up a little. Some names feel too cute with mini middles. Others just plain repeat the same sounds. I dropped Thea – even though it’s great with Gemma. It might be worth putting Bea aside until you’ve settled on your first name, and then circling back.

But for our purposes, we’ll work with Bea/Bee.

A SISTER FOR GEMMA LOU

Cecilia is a long and lovely name. The shorter Celia is not only less common, but also might work better as a sister for Gemma. Plus, Celia Bea is all kinds of darling without crossing the line to twee.

Yes, it’s three syllables. But there’s something smooth and complete about Eliza.

Cora and Nora would work nicely, but the Top 100 names feel a little too popular. How ’bout Flora? Like Gemma, it’s a gentle nature-adjacent name.

Originally short for Margaret, Margot has long stood on its own. It’s an energetic, modern-sounding name, but grounded in plenty of history.

The -ola ending had a moment during the twentieth century. Now Lola is back, and Nola, too. It brings to mind New Orleans. Nola can be short for half-a-dozen names, but it also stands nicely on its own.

You mentioned Stella. Would Willa substitute? The vibe is a little different, but the sounds are similar.

It sounds like Sarah-with-a-Z, but Zara has several possible sources. Just like Gemma reads as classic-with-a-twist, so does Zara. That makes it an obvious match. Another Z name that might fit is Zelda (#662).

Margot and Daphne strike me as the obvious sister names for Gemma. But if you love the flow of Gemma Lou, I wonder if something like Celia Bea or Willa Bea isn’t the better choice?

Readers, over to you! What would you name a sister for Gemma Lou?