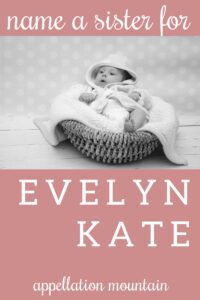 We have a three year old daughter named Evelyn Kate. I love (almost) everything about her name. It sounds crisp and sophisticated, but it’s not too much for a child. And it doesn’t scream “born in 2018” like some names do.

OR maybe it does, because the only thing that I don’t love about Evelyn is that we’ve met a lot of them since our daughter was born. Not, like, baseball teams’ worth of little Evelyns. But more than a few, not to mention girls with names like Eva and Everly who are also Evie/Evy, as our daughter sometimes is.

That’s not enough to make me dislike the name, but now that we’re expecting again – and it’s another girl! – I’d love to find something that’s a lot like Evelyn, but maybe a little less popular. But I’m not sure I trust our judgement this time around – we were sure that we’d never meet another Evelyn!

Evelyn Kate is a great name – strong and tailored, but feminine, too.

I do think that our radar for popular names gets much better after we’ve had our first child. After all, I’m guessing you didn’t spend a lot of time around small children before you were parents, right? At least, not this kind of concentrated, hours-on-the-playground time.

It definitely increases our awareness of which names are common.

And here’s the thing: it will especially make you aware of the name that are most common in your circles. Data is amazing, but we tend to look at it nationally, Or state-wide. But my little corner of the world has slightly different trends than a county an hour away. And everyone’s circle of friends and family tends to share certain favorite names – just like we love the same music and television series and restaurants.

And so, yes, Evelyn was already near the top of the popularity charts when your daughter was born. You’re right that factoring in all of those other Ev- names can make it feel even more common!

So it’s easy to see what we should avoid. Evelyn’s sister can’t be Amelia or Sophia or Charlotte. (Though Evelyn and Charlotte would be great together!)

Instead, it’s a question of how different your new daughter’s name should be.

And I’m guessing we’re not really talking Georgette/Delphine/Mariel. Because even though they fit the bill, they might be a little too different.

Instead, let’s look for names that share the same tailored qualities as Evelyn, but fall somewhere between the very popular and the quite rare.

A SISTER FOR EVELYN KATE

Adeline is just a little too close to Evelyn, but Adelaide – with that distinctive ‘d’ ending sound – feels like a perfect pair.

Every bit as vintage as Evelyn, Dorothy is just a decade or two behind Evelyn in terms of a comeback. So your Dorothy might eventually coach a bunch of smaller Dorothys in youth soccer, but she won’t share her kindergarten class with them.

Frances manages to be strong and delicate all at once. Nickname Frannie sounds exactly right with big sister Evie.

A short name with plenty of nickname options, Louise makes a logical sister for Evelyn.

My first thought wasn’t Maren – it was Miriam. Both are often connected to classic Mary. But while Miriam is a sepia-toned throwback, Maren brings a more modern energy. Either works as a sister for Evelyn, but if vintage gems like Dorothy and Louise fall flat, perhaps Maren is the answer.

There’s something timeless about Meredith. It’s ranked in the US Top 1000 for over a century straight, but the name has never entered the Top 100. It’s impossible to pin to a particular era. And Evelyn and Meredith sound great together.

It might not have the long history of Evelyn, but I think Winter is a great match sound-wise. And season names have many of the same appealing qualities – they’re easy to spell and pronounce. I’d call them modern traditionals, the kinds of names that will stand the text of time.

For a perfect match, I keep going back to Adelaide. I think it satisfies your criteria exactly without being too close to Evelyn.

But I wonder if it’s worth exploring some of the slightly different options? Winter and Maren both offer something a little different, but still very compatible. I love the sound of Evelyn Kate and Maren Frances.

What would you name a sister for Evelyn Kate?