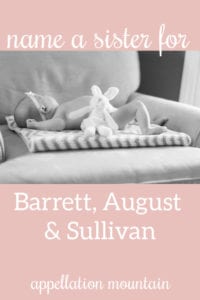 I’m due with my first girl after three boys and I’m struggling!

Clearly I like surnames as first names and nicknames!

I also think anything that ends in -er unfortunately doesn’t go well with our last name.

Congratulations on your daughter – what exciting news!

Let’s begin with the question that confronts every family who has two or more children of one gender first: is your boy name style the same as your girl name style?

It’s perfectly fine for the answer to be no, or not really, or maybe. And really, it’s the process of sorting through potential names that clarifies your answer.

I’m going to assume the answer is, for our purposes, at least kind-of, sort-of.

Which leads to my next question: do you want a unisex name for your daughter?

Names run on a continuum. Harper, Blair, Sloane, and Quinn sound gender neutral, but are used more commonly for girls; Rowan and Parker fall somewhere in the middle; and names like Barrett and Sullivan tend to be almost exclusive to boys.

Of course, that’s a snapshot based on 2018 data. Usage shifts all the time.

All of that said, I’m going to assume you’d like a surname-style name with nickname potential, but I’m going to choose names with slightly different profiles when it comes to unisex/gendered.

A SISTER FOR BARRETT, AUGUST, AND SULLIVAN

Adair – Bright and adventurous, Adair is a name that leaps off the tongue. It blends in with so many girls nickname Addie, but could easily shorten to Dar or Dare, too. One hesitation: Addie is awfully close to Augie, though I don’t think it’s too close.

Bellamy – After years of growing interest, Bellamy has recently debuted in the US Top 1000. Credit likely goes to a (male) character on sci fi television series The 100. (It also boosted Octavia, as well as Clarke for a girl.)

Ellison – It sounds a bit like Allison, but Ellison feels fresh and new.

Hadley – A name that sits just outside the current Top 100, Hadley caught on after The Paris Wife became a bestseller. The work of historic fiction imagined the lives of Ernest Hemingway and his first wife, Hadley Richardson, in – where else? – Paris.

Marlowe – We love o ending boy names, like Leo and Arlo. But we’re also big on Willow and Margot for girls. So Marlowe could go either way, though the numbers give it to girls at the moment. It’s bright, upbeat, and doesn’t anything like your older kids’ names.

Quinlan – I mentioned Quinn above, and that’s an option. But if you prefer a formal name/nickname combination, Quinlan called Quinn works nicely.

Teagan – An Irish surname name, Teagan is almost mainstream for girls, a potential successor to Kelly and Kennedy.

Some of these names, like Adair and even Marlowe, fall more outside of the mainstream than your boys’ names. My favorite is Laine, with the nickname Lainey. But, of course, that assumes you’re comfortable with the same surname style for a daughter.

Readers, over to you – what would you name a sister for Barrett, August, and Sullivan?