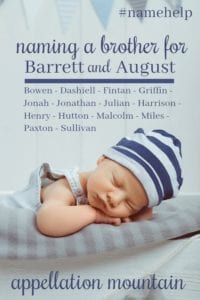 Hi! We need help coming up with a name for our third boy! We’re really struggling with this one.

We have Barrett Lee and August Lee, although he goes by Augie 100% of the time.

This baby’s middle name will also be Lee. I personally also love nicknames, like Bear and Augie.

How exciting to be expecting your third son – congratulations!

I thought this would be the easiest list to write, but it’s harder than it looks, isn’t it?

Here are the constraints as I understand them:

That’s not so bad! But then we also need a name with a great nickname. I’m a nicknamer, too, so I can attest that this ups the complexity of name choices. You need to love both the formal name and the short version – and you need the two to be plausibly connected.

Plus, both nicknames have a cuddly quality. They make cute choices for little boys, but might not be used in a professional context. So it’s not just a nickname – it’s an affectionate one, and that narrows our search even more. Lastly, it seems best if the nickname isn’t too common. Augie and Bear aren’t anything like, say, Billy or Joe.

The first few sets of names I considered failed at least one of these tests!

But with a little more looking, I found some possibilities:

Bowen – I keep thinking about Beau – or Bowie, or Bo. It has the same informal vibe as Augie and Bear, but I think Bowen matches Barrett and August. My only hesitation: does Bowen seem too close to Barrett? I don’t think so, but some parents prefer to give every child his own initial.

Dashiell – Dash ranks in the current US Top 1000, but the most familiar formal name – Dashiell – does not. And yet, I think it has a similar vibe to Barrett and August. And Dash is downright darling.

Fintan, Griffin – Finley made my first draft, until I realized Finley Lee is a non-starter. But lots of great names shorten to friendly Finn. I really like the Irish saint’s name, Fintan, but maybe it’s a little too obscure? Griffin, on the other hand, seems to hit the mark exactly right.

Jonah, Jonathan – I can’t recall where I heard Jono listed as a nickname for Jonathan. (Australian readers: is this a thing for you? I’ve never heard it in the US.) I think it works for Jonah, too, and maybe some other names, too. Jonathan seems a little tame compared to Barrett and August, though, and I’m not sure if Jonah will appeal. Still, I like Jono enough to keep it on the list.

Julian – Maybe because “Hey Jude” was written for Julian Lennon, it feels like it can serve as a nickname, even if the names are unrelated. There’s also Jules, which I think has potential.

Harrison, Henry – The nickname that I kept coming back to: Huck. Bear, Augie, and Huck sound like they’re off to climb trees and catch snakes in the woods. (Or something outdoorsy and picturesque.) But what formal name leads to Huck? I like Henry best, but maybe that’s too classic and common for you? Harrison seems like an obvious alternative. Or maybe Hawthorne, Hugo, or Hutton? Ooh … Hutton might be my favorite! I would normally suggest Huxley, but there’s that -ley/Lee conflict again.

Malcolm – Mal seems like the go-to short form of Malcolm, but Mac works, too. And I think Mac has that same informal vibe as Auguie and Bear.

Miles, Mills – I wonder if you’d like an ‘o’ ending name, like Milo or Arlo? Milo and Miles are two forms fo the same name, but I think you could use Milo as a nickname for Miles. Or maybe Mills?

Paxton – Bear, Augie, and Pax are fun to say together. Paxton ranks in the 200s in the US, making it very similar to August and Barrett in terms of use.

Sullivan – Sullivan might be Sully for short, which is every bit as sweet as Augie. Or maybe Sullivan shortens to Van? Both seem promising.

Overall, I’m most drawn to Hutton “Huck” and Dashiell “Dash.” They can satisfy the requirements for both the formal name and the given name – a tall order!

But I’m sure I’m forgetting dozens of options, so let’s turn it over to the readers.

What would you name a brother for Barrett “Bear” Lee and August “Augie” Lee?