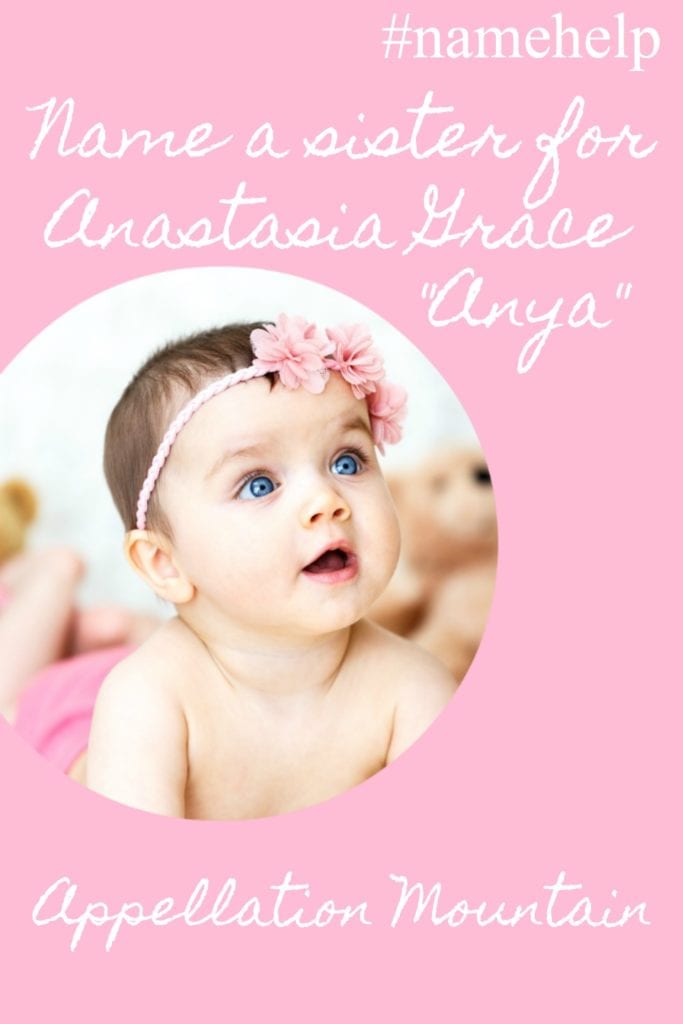 We have an update!

“Hi Abby! I meant to send an update and Thank You to you and your amazing readers for helping us name Anastasia’s little sister. We seriously considered Josephine, nn Sophie (big sister’s name for baby), as a reader suggested. And will probably keep it on our list if any more girls come our way! Your final suggestion of Evangeline was very on point and would absolutely have been an top contender if it weren’t one of our best family friend’s daughter’s name. In the end, Genevieve Adele flew into the world happy and healthy on August 3. Her big sister calls her Vivi!

Hello! We have a three-year-old named Anastasia Grace, nn Anya and need help finding the perfect name for her baby sister, due in early August.

My husband gave me a list of names early on and I really do like a lot of them. I’m just not sure any of them are IT, and I keep thinking there’s must be a name I’m missing.

I love long, feminine, nickname-rich names, names that are familiar, but not necessarily expected and have lots of personality.

With our first, we knew that we wanted to honor Gramma Elverna Sylvia, but how? My husband fell in LOVE with the name Anya. I kept trying to brainstorm longer name ideas and eventually came up with Anastasia, which had been on the long list of girl names that I had collected over the years. After I told him the meaning of Anastasia, resurrection/one who will rise again, he was 100% sold. It was the perfect honor name, without feeling forced, and hit so many style notes and preferences!

We would love a name with Greek origins, because all three of, including Anya, have one, and it would be a fun, subtle connection. A saint’s name would be great, too. (Our daughter was born on Saint Anastasia the Patrician’s feast say – confirming that it was perfect!)

I see what you mean – your list is long, but most of those maybes feel like they’ll become nos, right?

Caroline – What if you chose an unconventional nickname? I’ve heard Lola and Rory suggested; there’s also Caro, and I think Coco works, too. You might even opt for Carolina, which makes this even more flowing and feminine.

Emilia – I know what you mean about Emilia feeling like the slightest tweak to Amelia. But it works! Emilia Clark on Game of Thrones helps the spelling’s visibility. Besides, strictly speaking, the names claim different roots. Nicknames Millie, Mila, and Mia all substitute for the Em- names that you’d rather avoid.

Gabriella – Funny, I heard a commercial for Chanel’s Gabrielle fragrance the other day, and found myself thinking that it’s more of a classic than we really acknowledge. But I wonder if Gabriella is the better form to satisfy you and your husband? You might use Ella or Ellie as a nickname, both choices that you haven’t mentioned.

Rosalie – Do any other Rose names appeal to you? I’ve always like Rosamund and Rosemary, because they offer potential nickname Romy. But if Roseline tops his list, I wonder if he’d agree to another Rose name? Double-names, like Annarose can suggest some unusual nicknames, too – like Ari.

But maybe fresh ideas will work better? I’m putting these in alphabetical order, but one stands out as my personal favorite for a sister for Anastasia – that’s listed after the suggestions!

Caterina, Catalina, Katrina – Would one of the European variations on Catherine/Katherine work? They remind of Caroline, but sidestep the co-worker conundrum. Plus, they feel more elaborate and less expected – a good thing for Anastasia’s sister. Lastly, they remind me – ever so slightly – of Michaela, which I agree, has gone from obscure-but-lovely-feminine-form to perpetual spelling hassle.

Cecilia – I went looking for names that could maybe lead to Sophie as a nickname and struck out. But would Cecilia/Cece appeal? There’s the saintly connection, the romantic sound, and the easy nickname.

Evangeline – Evangeline takes trendy Everly in a literary direction. It shares the -line ending of Caroline, and sounds very much like a sister for Anastasia without being too similar. Other Ev- names come to mind, like Everild and Evadne, but I think Evangeline hits the familiar-not-common mark beautifully.

Genevieve – While we’re talking about Ev- names, I tend to include Genevieve in that group. Sure, the -eve is at the end rather than the beginning, but it’s most definitely there. It also seems like a good alternative to Madelyn/Madeleine and Gabrielle.

Persephone – I think you could stretch and call Sophie a nickname for Persephone. It might be too mind-bending for your husband, but if we warmed to Anya/Anastasia, he might get on board with this idea, too. Parents love Penelope, which has some considering Persephone as an alternative. It’s much more wearable than, say, Sophonisba. Or, of course, you might just consider Penelope, a name with nicknames galore.

Seraphina – Persephone and company always make me think of Seraphina. No, you really can’t get to Sophie from this name – there’s just no O. And yet, it sounds like your style of name. Sera could be a great sister for Anya.

If I didn’t give it away above, my top pick for you is Evangeline. It feels like it fits exactly in the middle of what you both love. Plus, the idea of Evangeline Sophie – to include the name her sister chose – seems really appealing.

Readers, I’m so curious to hear your thoughts. Are there other names that leap out to you as obvious choices for Anastasia “Anya” Grace’s sister?