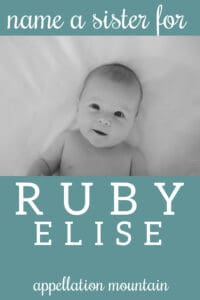 My partner and I have a two year old named Ruby Elise. We think her name is perfect. (And she’s pretty great, too!)

Our second is due in October. We’re team green again, and just like with Ruby, our boy name is Miles Jacob.

But this time, we have no girl names.

Maybe we’re being too picky, but here’s our list of requirements:

One name that we both like is Opal, but we really don’t like that idea. To me, it would feel like Opal’s name was just an extension of her sister, and that feels wrong. That also makes me think that maybe we should rule out any word name, like Hazel, which I would like if it wasn’t already a friend’s child.

Can you help us think of some names that go with Ruby Elise?

Congratulations on your second!

It’s so good to know what you want – and yet, it can sometimes feel like a long list of requirements reduces your possibilities to zero.

That said, I think your list is actually pretty workable. Lots of names are both nickname-proof (or at least nickname-resistant) and have a single dominant spelling. And we can sidestep the Pixels and the Dominiques, too.

A SISTER FOR RUBY ELISE

There’s a sweet simplicity to this name. It’s been worn by world-changing women, from Alice Paul to Alice Walker. But it’s still very Wonderland, a name as appropriate for a child as it is for an adult. Could it shorten to Ali/Allie? Sure. But it’s not very likely.

Like Ruby, Cora is a vintage name that’s popular again now. It’s easy to spell and pronounce. Sure, you’ll meet the occasional Kora/Corra, just like there’s sometimes a Rubi. But Cora would enjoy the same ease of wear.

Could Daphne represent a midway point between all those soap opera names like Dominique and the ones that you prefer? It offers just a hint of drama and frill, but it’s still very much a single-spelling kind of name.

Since you liked Elise enough to make it Ruby’s middle, would you consider the similar Eloise as a first?

Okay, Piper takes us in a slightly different direction. It’s more modern; a surname choice and possibly a word name, too. (Or at least word-adjacent.) But actor Piper Laurie’s career began in the 1960s, so it’s not a true novelty.

Sophia and Sofia are wildly popular, while the French Sophie is just a little different.

Depending on the origin, this can mean truth or faith. It’s a strong name, with a distinctive sound.

Timeless Vivian is at-home in any era.

My favorite from this list is Daphne, particularly with a brief middle. Daphne Jean, Daphne Grey, Daphne Vale. But I feel like maybe Cora and Vera fit your requirements list a little better? And that makes me wonder if something like Cora Piper or Vera Scarlett would appeal?

Readers, over to you … what would you name a sister for Ruby Elise?