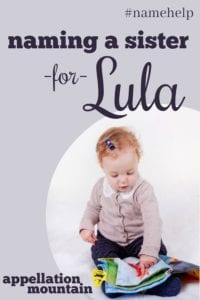 I love your site and read it all through my last pregnancy where we had a daughter named Lula.

We now have a second on the way and are having trouble coming up with a name. We want something more on the rare side but not too unusual as a name. Nothing in the top 100, or ideally even top 1000 of current American names. We like names that are a bit gender neutral and have meaning that speaks to us.

Some names we have talked about are Paloma, Marlowe, Wren, Maeve, Jasper, Percy, Penn, and Pax.

There are name we love but know people with so feel odd using like Sawyer, Harper, Finn, Willow, Rio, Dakota, or Oona.

I feel like these put us in line for a name like Beatrice in terms of meaning and rarity but ease and neither of us love it.

I would love some ideas or your thoughts on where we should be looking or thinking about.

Lula hits all the marks – a rare name that feels easy to wear, not in the Top 1000, but still somehow familiar. Since Lula most often comes from Louise, we usually borrow that name’s meaning: famous in battle. Or were you attracted to the idea of Lu- names connected to the Latin lux, light? Either way, it works.

Compared to Lula, Beatrice feels almost heavy. Maybe a little too traditional and buttoned-up to be a sister for Lula? It could work, of course. But I’m not surprised to hear you’re not feeling it.

So, on to the rest of your list? Paloma, Marlowe, Wren, and Maeve all appear in the current girls’ Top 1000. Jasper ranks in the boys’ Top 200, which seems a little too popular, too.

That leaves Percy, Penn, and Pax. If it turns out that Lula’s sibling is a boy, they’re exactly what you’re looking for! I’d cheerfully choose Penn out of your finalists, if only because it seems rare, but not too out-there. Though those same qualities apply to Percy and Pax, so I think any of the three would work.

Let’s focus on naming a sister, because I think some fresh options might help.

Bette – Pronounce it with one syllable, to rhyme with jet, or say it like Betty. Either way, Bette is spare and sophisticated, a rare, vintage name that seems right at home with sister Lula. I like it best as a single-syllable name, at least for your family. It makes it sleeker, and, if not unisex, a little less frilly.

Briar – There’s something harsh and brambly about Briar, but delicate, too. Sleeping Beauty often adopts the name Briar Rose, which makes many of us think of the name as feminine. But this one appears in both the girls’ and boys’ Top 1000, ranking #880 for boys and #718 for girls. So it’s unisex, but still feels like a sister for Lula.

Carys – You’ve mentioned meaning, and so I went back to this list: Great Girl Names Meaning Love. Carys comes from the Welsh word caru – love. I rhyme it with Paris, though I’ve heard it said more like care-is, too. Actors Michael Douglas and Catherine Zeta-Jones gave this name to their daughter way back in 2003, but it’s never caught on in the US.

Elska – A second one from the love list, Elska comes from Norway. Just like Lula reminds us of Lily and Lucy, but claims a different, distinctive sound, I think Elska marks a similar-but-different choice from Ella and all the other -ella names we love.

Etta – On that line of thought, how about Etta? Despite twinning with Emma and Ella, Etta remains outside of the US Top 1000. Etta James – born Jamesetta Hawkins – lends it some jazz. Like Lula, it’s a vintage gem that would’ve felt mainstream a century ago, but today is sadly overlooked.

Linden – If matching Lula in terms of style doesn’t appeal, would you consider another L name? I think Lula and Linden – a tailored, rare, nature-name pick – sound like sisters because of the shared L sound. Other possibilities in this same category: Lennon (though it’s in the Top 500 for girls, and not far behind for boys), Laurel (#597 for girls), or Landry (again, a Top 1000 pick for both genders.)

Maren – Despite being relatively new to the US Top 1000, Maren is making waves. The jumped dramatically, to #633 this year. But it seems like exactly the right style match – feminine, but tailored and unexpected. And it still feels relatively unknown. The meaning is opening to debate, since it’s sometimes linked to the Latin maris, for the sea, and sometimes to traditional given names like Mary and Margaret. That reminds me – two similar options are Maret, a contracted form of Margaret, and Maris, from the Latin word.

Scout – Harper appears in the US Top Ten, thanks in large part to the legendary Harper Lee of To Kill a Mockingbird fame. But her most famous character is Jean Louise Finch, better known as Scout. Despite this association, Scout remains just outside the current US Top 1000. Lula and Scout together sound like sisters – a little unconventional, maybe even bohemian, but very nicely paired.

Overall, my favorite is Carys. Maybe it’s because the meaning works so well, or perhaps it’s the tailored, but still feminine, sound. I guess I’d have to make Maris a close second, though Maris strikes me as even less familiar as a given name. (It’s not. Or at least that’s not true for last year, when 62 girls were named Maris, versus just 54 newborns called Carys.)

I think Briar also stands out as a favorite, and an excellent sister name for Lula.

Readers, over to you! What would you suggest for Lula’s sister?