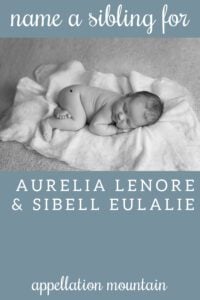 I like Oberon for a boy, but I’m stuck on middle names.

For a girl I’d like to keep the Edgar Allan Poe theme, as it honors my first daughter who passed, Annabel.

A few names that I love but aren’t sold on are: Rowan, Madeline, and Morella.

The thing about themes is this: we notice them, and they matter to us and to our families. But they’re often invisible to those outside of our immediate circle. I know enough about Edgar Allan Poe’s works to immediately recognize Lenore. Eulalie took me a minute. (And probably I know that from reading about the name, not from the poem.) I’m not sure about Aurelia or Sibell, and Google hasn’t supplied an immediate answer. (Though Sibell makes me think of “The Bells.” Is that a reference, or am I overthinking it?)

But it sounds like the thread matters to you, so let’s continue it. Some Poe names seem easier to wear as middles: Ligeia, Berenice, even Tamerlane, maybe? I’ll skip those in the girl names list below.

Instead, let’s look for darkly romantic names for a daughter.

Oh, and middle names for Oberon?

Drawing from this list, my first thoughts were Rook, Onyx and Nicodemus. Oberon Rook is amazing! Another thought: Poe might work. After all, this generation will grow up thinking of Poe as a Star Wars hero, not just a literary rock star.

In Greek myth, she bewitched Odysseus. It also appears in Libba Bray’s A Great and Terrible Beauty trilogy as the name of an other-worldly villain. It would’ve been harder to wear in an earlier age, but all those Penelopes and Zoes and Phoebes have taught us that the final ‘e’ is pronounced.

Ancient Roman and rich in dignity, Claudia has history to spare. Anne Rice gave it to a little girl vampire, lending this name some Gothic overtones. But plenty of other uses of the name balances it out nicely. And since Aurelia and Sibell also share ancient roots, it feels like a fit.

Another choice from the ancient world, Drusilla makes me think of Caligula’s sister. So it’s plenty dark, but it’s also quite lovely. (And Dru is an easy, but unconventional, nickname possibility.) Fans of Buffy and Angel will also recognize it as the name of a vampire from the series, but I think that’s a pretty low-key reference.

At this moment, Eliza is very Schuyler sister and wife-of-Hamilton. But it was also the name of Edgar Allan Poe’s mother, and he married Virginia Eliza Clemm. It’s throughout his family history, and perhaps that makes it a fit.

While Poe didn’t immortalize Evangeline in poetry, Henry Wadsworth Longfellow did. “Evangeline” was published in 1847; “Annabel Lee” in 1849. While both poems are tragic, “Evangeline” is also hopeful. On sound alone, I can imagine Evangeline as a sister for Aurelia and Sibell. Factor in this literary reference and it works even better.

Poe’s poem “Al Araaf” was new to me. It’s based on the Danish astronomer Tycho Brahe’s 1547 observations of a supernova. Ianthe covers all of the natural world. It refers to violets, but in Greek myth, it’s the name of an ocean nymph. As with Circe, I think Ianthe is easier to wear than ever today, though it’s still rare.

The first name that came to mind! It’s borrowed from the name of Poe’s real life friend, Octavia Celestina Valentine Walton Le Vert. I mean … just her name is amazing. Also a writer, she and Poe corresponded for years, until her death. He wrote a brief poem inspired by Walton. It’s more than enough to make this name feel like a match.

There’s no Ophelia in Poe’s works, but Shakespeare made it plenty tragic. The fantasy Pan’s Labyrinth used the Spanish spelling (and pronunciation) Ofelia. Along with Octavia, Ophelia has followed Olivia into wider use.

A SIBLING FOR AURELIA and SIBELL

For a boy, Oberon Rook gets my vote.

I think the options are broader for a girl.

For something really daring, Ianthe Ophelia would be my first thought.

But maybe something like Eliza Circe feels a little more balanced?

Evangeline is a little long to use with some of these middles. But I think Evangeline Rowan could be lovely.

Readers, over to you. What would you name a sister for Aurelia Lenore and Sibell Eulalie?