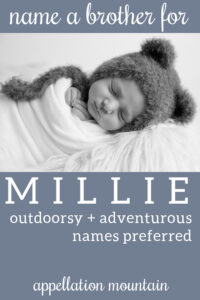 My husband and I are really having a hard time coming up with a name for our baby boy due in August.

Do you have a list of boy names that are related to exploring/adventure/nature/mountain related? My husband is really into traveling, and he keeps suggesting that we name our son after a mountain pass or something. However, I’m not fond of any of the suggestions he’s made.

I was wondering if you would make a name suggestion post? Our daughter’s name is Millicent (Millie) Michaelle. We mostly call her Millie.

While I don’t have a specific list that covers the theme, let’s see if we can’t make one now! I think the challenge is this: a name borrowed from a mountain pass might be richly meaningful. Or it could be burdensome, the kind of name that has to be explained constantly.

I’d guess it’s often a little of both.

So unless you both agree that Flexen (a mountain pass in Austria) or Grafton (in Maine) is significant to you both, and you’re willing to spell, repeat, and explain your son’s name frequently? Well, then, it’s probably better to strike a balance.

Let’s look for mainstream names with ties to adventure – because that’s a great suggestion! – or that just happen to be shared with mountain ranges and passes.

It makes the name a both-and: both meaningful, because it refers to something your husband loves, and mainstream enough that it’s easy for your son to wear.

Frontiersman Jim Bridger’s name dots all sorts of places in the Mountain West. In fact, it’s made the Top 100 in places like Wyoming. And yet, it’s a Top 1000 choice in the US more broadly, and a name that fits in well with Carter and Hunter.

Brooks sounds outdoorsy, but it’s also the name of a mountain range, stretching from Alaska into Canada’s Yukon Territory.

The Saint Elias Mountains are also found in Alaska and Canada, plus Mount Saint Elias is the second-highest mountain in the US.

Let’s wing our way to the other side of the world, where Australia’s Mount Huxley suggests this possible name. But even without the Tasmanian mountain, Huxley sounds like an adventuring name for a son.

A ridge is an elevated mountain crest; it’s also familiar as a surname. That combination makes it feel nicely rugged, and yet perfectly wearable, for a child.

A strong name, easy to spell and pronounce, and yet quite unexpected.

Wild could suggest chaos. But in this case, the name conjures up the wild, untamed outdoors.

PUTTING IT ALL TOGETHER

If there is a more obscure, not-quite-a-name suggestion that your husband loves, is there any chance it’s perfect in the middle spot? There are lots of reasons to go big with a middle name, and if you’re chosen something more mainstream as a first, then it works even better.

In fact, that’s my favorite idea. Something like Everett or Brooks, paired with a more distinctive middle, possibly drawn from a significant place in your lives or an explorer/climber your husband admires.

Readers, over to you: what would you name a brother for Millicent “Millie” Michaelle that sounds bold and adventurous?