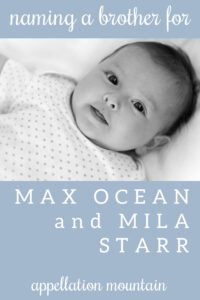 This baby will join Max Ocean and Mila Starr.

We plan to use another nature name in the middle – though we haven’t decided that name yet, either.

There are no names that my husband and I both love and that flow with Max and Mila. Everyone we ask thinks we should use another M name, and we have thought about Mason.

But I am okay breaking the pattern. We have also thought about a G name to honor our grandmothers, Gloria and Gita, like Griffin or Grant.

My favorites so far are Asher, Levi, August, and Rex. (Although Rex I think is too similar to Max.) My husband really likes Grant and Xander. His name is Alex, so Xander would be a continuation, which might be weird.

I would love to hear your suggestions. Thanks for your help!

It sounds to me like your preference is a non-M name. At least, none of your favorites begin with M. And your husband doesn’t seem especially inclined to stick with more M names, either.

Switching to a G name – particularly with such a compelling reason! – is a good idea. But, again, it sounds like G names are just okay for you. Griffin and Grant would both be good options, but I’m not sure they’re at the top of your list.

I share your instinct that Rex and Max are too close.

As for whether naming Alex’s son Xander is a little extra?

But countless families have a Ryan Sr. and a Ryan Jr., a William Sr., William Jr., and William III. And so on. While it’s a little cute to use the second half of dad’s name, it’s arguably more subtle than naming him Alex Jr., so I’d (probably) keep it on the list.

The one advantage to Xander? There’s no question as to why he has an X name rather than an M.

That leaves Asher, Levi, August, and possibly Xander. I think they’re all great with Max and Mila. My favorite is Levi. It’s brief, stylish, but still timeless. And I love the way Levi shares a high value Scrabble letter with Max – V and X – and the L in Mila, too.

Levi August would be a little bit of a nature name. Levi Griffin or Levi Grant picks up on the G theme. But if you wanted to use an M name and a nature name in the middle spot?

I can’t stop thinking about Levi Mercury, but I wonder if you’ll find it too much? Ocean, Starr, Mercury … it works!

Maybe a few fresh ideas for first names would help.

A BROTHER FOR MAX and MILA

Traditional, brief, and complete, Finn sounds like a brother for Max. And since the sound is embedded in Griffin, I wonder if it already appeals?

Thinking of G names, I immediately thought of Grayson. But maybe Gray is even better?

August shortens to Gus, but Gus is a cool nickname-name that gives you the initial G.

A natural name for Max’s brother, and I love it with Mila, too.

I’m guessing you’ve considered pretty much every M name under the sun, but just in case … Originally a place name, it coincides with our word merit, meaning worthy.

How ’bout just Nate? Not Nathan or Nathaniel. It’s bright and upbeat, an easy name to wear.

I always think of Sam as a brother for Max. The question, of course, is whether it’s best to have Sam stand alone, or be a nickname for Samuel? The data tells us that most parents opt for Samuel on their son’s birth certificates, but both are options.

Likewise, most Theos are Theodore. But in our age of Leo and Milo and Arlo, just Theo works nicely, too. And I think it’s a great brother name for Max.

I’m still stuck on Levi from your original list. I think it’s perfect!

And the advantage to Xander? There’s no question about why you broke the pattern.

In both cases, your middle name could be both a nature name and start with an M … which might make it feel less like you’re breaking a pattern and more like you’re just continuing in a slightly different way.

But let’s ask the community, because I’d love to hear more ideas!

Readers, what would you name a brother for Max Ocean and Mila Starr. And do you agree with me that moving away from M names seems to be the better approach?