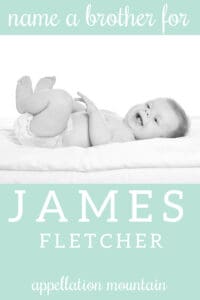 We have a three year old son named James Fletcher LastName, and we’re expecting another boy in March.

Our first son’s name was sort of decided before I even met my husband, so he agrees that I can choose our new baby’s name.

Except I really don’t know where to start!

My husband is the fourth generation named James. Every James has his mother’s maiden name as a middle name, so they’re not juniors/IIIs, but it’s still a lot of repetition.

My husband is Jay, his dad is Jim, and our son is Jamie.

At first, I didn’t like the idea of not getting to choose our son’s name at all. Except I loved the idea of using Fletcher as a middle name, and the way that the tradition incorporated the mothers’ families/my family, too.

We both agree that we’re completely done with family obligation names, and this decision is ours alone, and mostly mine.

Here are my questions:

I’ve heard of this naming tradition before, and I like it for the reasons you’ve mentioned – it’s not all about handing down a name from dad’s side.

Okay, on to your questions.

Will one son feel left out if he doesn’t have a family name?

Maybe, possibly. But probably not. Plenty of families do exactly this – their firstborn is a junior, or named for a grandparent. And then they go their own way with future children. Since it sounds like there aren’t any other family names that you’d like to consider, I think you can safely drop this one off your list of worries.

Should you match the James-called-Jamie style?

If it speaks to you, sure.

The challenge of using a family name for your first is that you haven’t really defined your style … but you can feel obligated to match it anyhow.

But I think the important part is to choose a name you love that sounds like a brother for Jamie. Any of the names on your long list fit that broad description.

So while you can name your son Charles-called-Charlie, I don’t think it is a requirement that your son receive a classic formal name with a cuddly nickname.

Would it be weird for both boys (and any future children) to share the middle name Fletcher?

No! In fact, I think this is more and more common. On the downside, you’re losing a chance to choose a new middle name that you love every time. But it connects all of your children to your family history. Also, it’s a great name!

So what should you name a brother for James-called-Jamie?

#3 Owen – We tend to think of Owen as current, but it’s got centuries upon centuries of history, too. Like Jamie, Owen has a bright, open sound. I think these two are great together.

#2 Theodore/Theo – While you don’t have to continue the pattern, I like Theo with Jamie for the same reasons I like Owen.

#1 Maxwell/Max – Okay, it was a close call between Max and Theo for the top spot. But I love the sound of Maxwell Fletcher LastName, so that swayed me. Also, while Max is plenty traditional, Maxwell feels just slightly more modern.

I’m not clear if Charles-called-Charlie and Benjamin-called-Benji are names you also like, or names you considered mostly to match James-called-Jamie? I do think they’re great choices, but I’d prioritize finding a name that you love over one that completes the pattern.

Of course, if this list makes you realize that you’d far prefer something completely modern, like Crew? That’s fine, too. Sometimes the best outcome of a #namehelp post is to realize that all of the advice is the exact opposite of what you want!

Readers, over to you – what would you name a brother for James Fletcher? Also, if you have advice on how to match a family name while still preserving your own style, please share!