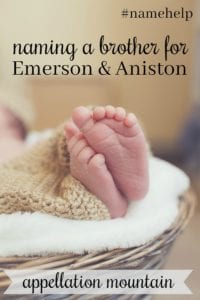 I am having so much trouble naming our new baby boy that’s due any day and would love some advice. My husband and I have two girls named Emerson Grace and Aniston Kate. We like different but not weird or “unique” names. Surnames tend to be our style as well. Our shortlist keeps changing and this baby should be here any day!

His middle name will be Michael (family name).

So far we have the following options:

Britton – Just added this one yesterday

I like Ford Michael best because of the family link, but is the association to Ford Motor going to be an issue for him growing up? Are we missing another name that would be a better fit? Any help or advice would be great!

Almost every #namehelp post ends with my list of suggestions for additional names to consider. But not this one! I think your shortlist is perfect as-is.

Let’s go through the four names that have emerged as finalists, but not necessarily in the order you’ve listed them.

If I had to drop one immediately, it would be Britton.

Here’s why: Emerson and Aniston are broadly familiar as given names. Emerson is fairly common; Aniston, not so much. But thanks to Jennifer Aniston, we all recognize the name immediately.

Britton seems like more of an outlier. 104 boys and 61 girls were given the name in 2016. It seems to be gaining in use for girls and falling for boys as a long-term trend. This makes me wonder. Would it be forever misheard as Brendan and Brandon and Brennan? Or would it be perceived as a spin-off of Brittany?

If it were your all-time favorite name, I’d encourage you to use it, knowing that it might take some repetition to get it right.

But since it’s a recent addition to your list? I think I’d move on.

Rhett started out as a surname name. But after Margaret Mitchell used the name for Rhett Butler in Gone With the Wind, we started to see it as a given name. (I assume Mitchell may have chosen it because there were old Southern families by the surname.)

The bestselling novel and the blockbuster movie it inspired weren’t enough to boost the name in the ratings; instead, it caught on in the 1950s and 60s, the age of rugged names like Clint, Bart, and Trent. And yet it didn’t really take off then, either – Rhett is at its most popular today.

I think it works nicely, and fits the different-but-not-too-different mark nicely.

Something I can’t help but notice: Emerson, Aniston, and Sullivan all have three syllables, without sounding too similar at all! I tend to find that kind of symmetry appealing, but it’s certainly not necessary.

Sullivan is probably less familiar as a given name than Rhett, but that’s changing. It re-entered the US Top 1000 in 2002 after many years’ absence, and has climbed steadily, reaching #409 by 2016.

One point to consider: Sullivan might shorten to Van, but I suspect lots of people end up calling Sullivan Sully. It’s friendly and approachable, and kind of a fun name. But if you’re not wild about Sully, it might be better to keep looking.

Ford ties in to your family history, which is a real bonus, but there’s much more to love about this short, simple name.

It combines a certain Americana spirit, thanks to the Ford Motor Company, with a rugged, outdoorsy vibe. (Think of fording a river.) Combined, it’s so much more than a car, isn’t it?

It sits just outside of the current US Top 700, so you might argue it’s too rare. But who hasn’t heard of Ford?

Names chosen for rock-solid reasons, like a family name, tend to wear well. Even if Ford catches on and becomes the next Mason, no one can take away the ties between the name and your loved ones.

It seems like a real bonus that Ford Michael connects across multiple generations, while feeling effortlessly at home in 2018.

I’d put Ford Michael and Sullivan Michael at the very top of the list, and I’d probably rank them in that order, too.

But let’s open it up to the readers. Which of these names seems best as a brother for Emerson and Aniston?