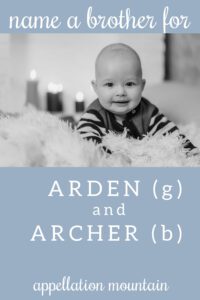 I feel like I’ve committed to “Ar” names with my first two children. My daughter is Arden, and son is Archer.

Now I hate every male “Ar” name I’ve come across!

Arlow is okay but seems too feminine alongside Archer.

So then I thought maybe we’ll try a new letter. Crew, Lincoln, Hunter, and Wilder, maybe? While I like all of those names, I don’t absolutely love them.

And I’m a little worried that Hunter and Wilder are a little bit too matchy-matchy for Archer. (Like Arrow or Beau, LOL.)

Our last name ends with an ‘s’ sound.

Any advice is appreciated!

I wonder if it would help to re-frame the question a little.

Arden and Archer do both begin with a strong Ar sound. But what if we just think of them as A names?

First, it broadens the list of possible A names to consider. Asa, Alaric, Axel, or Apollo all become possibilities.

But it’s also true that lots of families have two siblings who just happen to share an initial. If families can have Edward, Elizabeth, and James, well … you don’t have to stick with a single initial, either – right?

Something else strikes me about Argyle, Argus, and Argon.

Arden is very unusual, not even ranked in the current Top 1000. Top 200 Archer is closer to the mainstream. But Argyle, Argon, and Argus? They’re almost completely unheard of as given names.

Hunter and Lincoln, though? They’re Top 100 names. That’s not to say you can’t choose something more popular. But I’m wondering if Argyle, Argus, and Argon aren’t just problematic because of sound. They’re just a little more daring than you’d prefer.

Crew, on the other hand, seems like the right level of familiar. It’s just inside the current Top 300. And while it’s rising in use quickly, it’s still not super common.

So let’s look at more boys’ names that feel strong and interesting, but hit somewhere between, say, Hunter and Argyle in terms of popularity.

A BROTHER FOR ARDEN and ARCHER

A little longer than the names on your current list, but another A and another name with a strong R sound. It’s just in the middle syllable, instead of the first.

More popular than Archer, but behind both Lincoln and Hunter. Plus, Axel is another A name with a strong, cool sound.

Beckett sounds like a brother for Arden or Archer – polished, complete, fun to say!

Much less common than Hunter, but with that same surname style, and all the appeal of legendary musician Jimi Hendrix, too.

Famous as the home of the US Gold Repository, Fort Knox adds a level of interest to this surname name.

From the constellation – and another name with a strong R sound.

A rising favorite for boys and girls alike, Remy is originally a French name meaning rower. It’s most famous as the given name of one of the X-Men.

Short for chart-topping classic Alexander, Xander stands on its own.

Overall, I’m most drawn to Orion. It seems similar enough to Arden and Archer, but still a distinctive name. It’s more mainstream than Argyle, less expected than Hunter.

So that’s my pick for the perfect brother name for Arden and Archer, but I know there will more great ideas.

Readers, what would you name a brother for Arden and Archer?