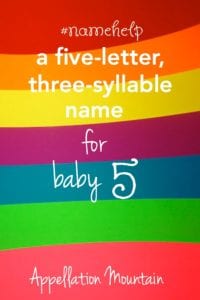 We’re expecting no. five and searching for a three syllable name with five letters. Male and female suggestions welcome!

The other four all have three syllable names with decreasing letters: Nathaniel, Jonathon, Brianny, and Elodie.

Since you’re an experienced parent – and namer! – I’m sure you might guess what I’m going to say. Rules were made to be broken, so if you fall in love with a six-letter, two-syllable name, use it!

Of course, once you see a pattern, it’s tough to un-see, and sometimes even tougher to break.

I’m also guessing that this will serve as a practical means to narrow down lists – and lists! – of potential names.

So let’s follow the rules, readers, and focus only on five-letter, three-syllable names. Since your boys’ names lean traditional, while your girls’ names feel slightly more creative, I’m going to draw from both styles when suggesting names.

Eliot – Elliot ranks #180, with Elliott close behind, at #192. The single-L, single-T spelling fails to crack the US Top 1000, but it’s a perfectly reasonable spelling. One advantage: Eliot splits the difference between the more traditional boy names and adventurous girls’ names you’ve chosen so far. If you’re feeling bolder, Elihu comes from the Old Testament and saw some use over the years. Elihu Yale founded a university in Connecticut that now bears his name. The downside to Eliot? It reminds me so very much of Elodie.

Emery – Does Emery seem too close to Elodie, too? Maybe. But it’s a great surname-name, likely related to Emmerich and other Germanic names.

Mateo, Maceo – Once upon a time, o-ending names seemed exotic. Today, they’re perfectly mainstream, with choices like Leo and Arlo and Milo topping lists of stylish boy names. Mateo and Matteo are romance language cousins to Matthew. The single-t spelling comes in at five letters, making it a candidate for you. If Mateo seems close-but-not-quite, there’s also Maceo, most likely an even more obscure Matthew spin-off.

Orion – I’ve saved my personal favorite for last: Orion. Once again, I think it’s a good compromise between the more traditional and the more daring names. Orion feels familiar because we all know a Ryan (or three), but it’s a bold name with ties to the night sky and Greek mythology.

Alina, Alena – Alina with an i ranks a few hundred places ahead of Alena, but both names share similar origins. They’re short for any number of names, from Magdalena to Adelina. Another plus to this name? It ends with an ‘a’ – one sound that you’ve yet to use for a child’s name.

Diana – Does Diana feel too traditional? In Roman mythology, Diana was goddess of the hunt, as well as the moon. Thanks to the new Wonder Woman movie, classic Diana feels more fierce than ever.

Lilia – Lily names have been quite common in recent years, but Lilia has never become wildly popular. it fits nicely with your older children’s names.

Livia – If Livia isn’t quite the right fit, how ’bout Livia? I’d guess Livia is often confused with the chart-topping Olivia, but Livia claims separate – and ancient – roots.

Noemi – Okay, Naomi fits the pattern and is far more familiar. Noemi appears in Italian and German, as well as a few other languages. It’s an unexpected sound, not unlike Elodie and Brianny. But Noemi keeps all the history of Naomi, too.

Zaria – I considered suggesting Zelia, too, but that always feels like Celia-with-a-Z to me. Zaria fits with all of the Zara-Aria names, and yet it does feel distinctive and different.

Overall, Orion easily wins top boy name for me. But the girls have me divided. I can argue a case for any of these, and my favorite changes every time I look at the list!

So let’s open it up to the readers: can you suggest some great five-letter, three-syllable names that aren’t too close to Nathaniel, Jonathon, Brianny, and Elodie?