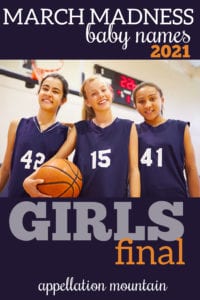 The time has come!

We’ve voted our way alllllll the way to the very final round of March Madness baby names for the 2021 season.

If you’ll recall, we started out the month with sixteen of the most popular girls’ names at Appellation Mountain:

After the opening round and quarterfinals, we were down to just four finalists: Maisie, Marigold, Persephone, and Magnolia.

Those names faced off last week. Here’s how the contests shook out.

By the slimmest of margins, Maisie squeaked past Marigold.

The deeper we go into March, the closer the matches get. And while Maisie’s defeat of Marigold isn’t the closest March Madness Baby Names victory ever, it was pretty razor thin. Maisie took home just over 50% – 50.39% – of the total. Maybe that’s no surprise – both names are established up-and-comers, vintage in appeal but just slightly unexpected. It’s easy to imagine parents having both names on the same shortlist. But Maisie just barely took the lead, and advances to the final.

On the other hand, Magnolia’s almost 63% of the vote is a clear victory. Flowery, gently antique, and nickname-rich, Magnolia has followed more tailored florals like Violet and Lillian up the popularity charts. It’s a substitute for Olivia, a sister for Rosalie. Persephone is no slouch, either – this name from Greek myth has recently entered the US Top 1000, and doubtless we’ll hear more of it in the coming years.

But for now, the contest comes down to two marvelous M names, one sparky and vibrant, the other elaborate and romantic.

Your vote decides which names wins it all!

Fun fact: the boys’ contest is a match-up of two names sharing the same first initial, too: Reid versus Raphael.

Polls are open for just a few days! Vote between now and Monday, March 29th. And come back on Wednesday, March 31st to learn which names take the title.