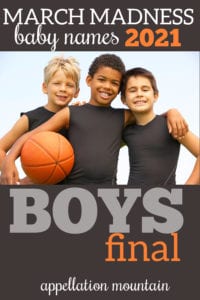 We’ve made it all through March! And now it’s time for the big match-up in March Madness Baby Names for boys.

Before we get to our contestants, let’s review where we’ve been.

We started with sixteen names, based on the most-viewed posts at Appellation Mountain during calendar year 2020. Popular posts here aren’t quite like the most-viewed names on other sites – they’re not a Liam or Noah in the bunch!

After the opening round and quarter finals, just four names advanced to the semis. Here’s how those contests went:

Welsh rarity Emrys tends to fare well at Appellation Mountain, but this might be the farthest the name has ever advanced. Overlooked traditional Raphael racked up nearly 65% of the total to advance.

The winner of the final match will join the following names in the victory circle:

Fun fact: Cora successfully defended the March Madness title in 2015, before we agreed that all past winners should be retired.

In the summer of 2020, we held a Ten-Year All Time Champions’ reunion contest. And Eliza ’18 and Theodore ’16 won that contest.

But back to 2021. Here’s the final match-up! Your vote decides which name joins the list above.

They’re both solid choices that would fit right in on this list: traditional surname name Reid and overlooked classic Raphael.