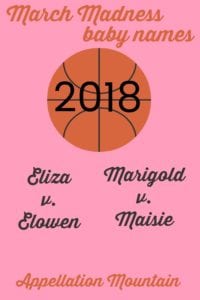 One of the QuarterFinal matches surprised me. Another one was expected – but oh golly, did the winner win big! It’s always fun to see which names really appeal when you’re forced to make a choice between just two options.

I think I have a guess for the girls’ winner. (Maybe you do, too!) It’s so different from the boys’ contest, which feels completely up-in-the-air.

The March Madness baby names 2018 girls’ winner will join an elite sorority of past champions. The first tournament launched back in 2011. Since then, we’ve crowned Louisa, Genevieve, Isla, Cora, Sylvie, and Wren winners. (If that list looks short, it’s because Cora successfully defended her 2014 in 2015. Since then, past winners are eliminated from competition.)

Let’s review the outcomes from the Quarter Finals:

And so we move on to our SemiFinals, where two E names and two M names battle it out for the right to advance to the Final Round.

I know the two names I think will make it to the finals, but it’s not up to me – this one is up to you. Please vote!

El- names feel unstoppable, from Top 20 Ella to classics like Elizabeth. Eliza, of course, is that regal name’s sassier sister, a short form that stands on its own. It’s got history galore, from Audrey Hepburn’s unforgettable character in My Fair Lady to nineteenth century First Lady Eliza McCardle Johnson.

Elowen is different. A Cornish import, it means elm tree. It’s a modern nature name, the equivalent of River or Willow in English.

But they both have tremendous appeal. In fact, they’ve both appeared in prior March Madnesses, as far back as 2012.

Now one of them could win it all …

Vintage Maisie fits right in with Sadie and so many comeback choices finding favor today. The name rose after Henry James’ 1897 novel What Maisie Knew became a movie in 2012, re-entering the US Top 1000 in 2014. It’s big in the UK, too.

Downton Abbey gets credit for Marigold’s higher profile. For now, the name remains comfortably outside the US Top 1000, suggesting that it will be at least a few years before we hear it as often as Violet.

That makes both M names choices that seem antique, but are actually enjoying newfound heights of popularity. Which do you prefer?

Voting will remain open through Thursday, March 22nd. Check back on Saturday, March 24th to see which two names advance to the Final Round!