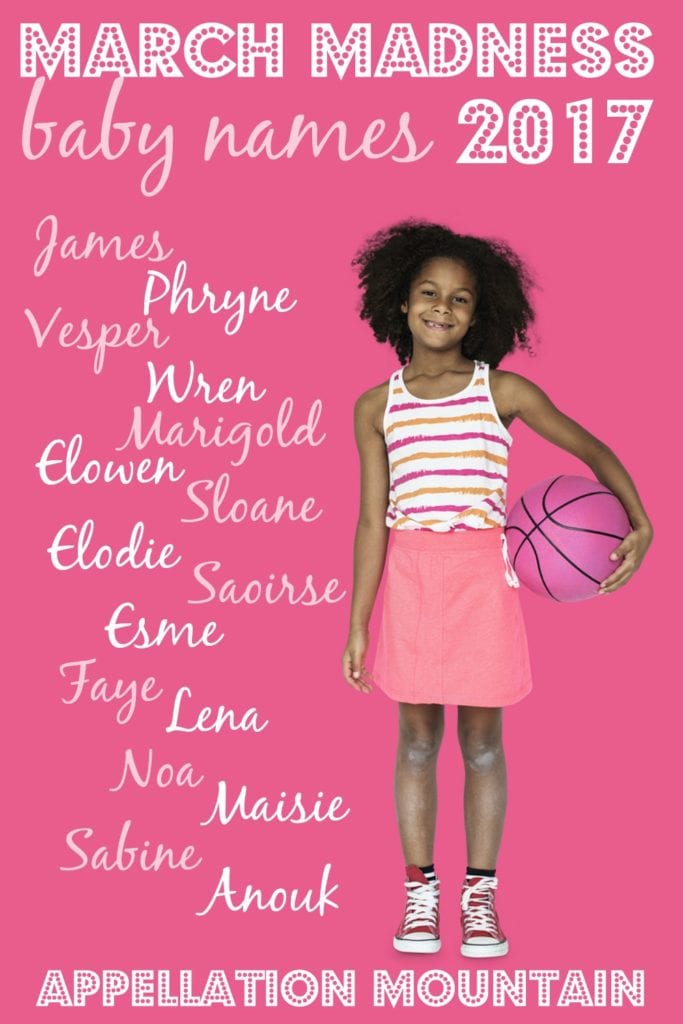 It’s the first Saturday in March, and that means it’s time for March Madness Baby Names here at Appellation Mountain!

This is the seventh year of competition. Can you believe it? Two years ago, we decided that past March Madness winners are expressly excluded from defending their titles.

That means that this year’s contestants come from the sixteen most popular girl names’ posts on the site last year – less any past winners.

The elite sorority of past winners consists of:

Several of these contestants are returning for 2016. Noa, Wren, Elowen, Elodie, Maisie, Phryne, Esme, and Marigold all appeared in last year’s March Madness, too.

If the sweet sixteen strikes you as a curious collection, you’re not wrong. These sixteen names represent the most viewed posts at Appellation Mountain during the previous calendar year. Some names fare well because they’re rarities not covered in-depth elsewhere. Others do reflect general naming trends. And a few probably just appeal to the specific preferences of Appellation Mountain readers.

If you think you spy an outlier on this year’s list, you’re not wrong. A post specifically about the name James for a girl was the run-away #1 post in the girls’ category for 2016. Despite some hesitation, I’ve decided to let the name compete. Thanks to the readers who weighed in on the question.

Speaking of readers, March Madness exists because of you – in more ways that one! Not only does it reflect the names you’ve spent all year following, it also works only when you click through and vote. The girls’ rounds debut shortly after midnight every Saturday, while the boys’ rounds follow later in the day.

The controversial James (for a girl) v. the international Anouk

Any guesses on which names will make it to the final round? I have my ideas …

Check back to see which names advance next Saturday! And, of course, vote in the quarter finals while you’re here.