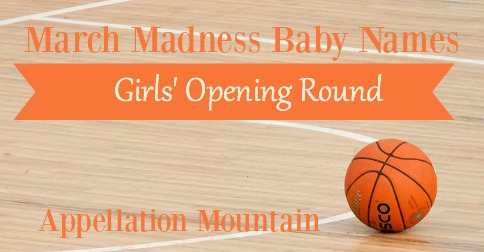 It’s the first Saturday in March, and that means it’s time for March Madness Baby Names here at Appellation Mountain!

This is the sixth year of competition, and the first year that prior March Madness winners are expressly excluded from defending their titles.

Past year’s winners are as follows:

Wren is back for another shot at the trophy in 2016. In fact, a lot of the contestants are not new to March Madness. Elodie, Esme, Pluma, Lena, Selah, Nadia, and Mira all competed in 2015, too.

How does a name make it to the sweet sixteen? It’s based on the most viewed posts at Appellation Mountain in the prior calendar year. Some of the names rank so well because they’re rarities covered more in-depth here than many other places. Other names are popular everywhere. And some simply reflect the tastes and interests of Appellation Mountain readers.

Speaking of readers, this one wouldn’t be possible without you – for a million reasons! But specifically, March Madness only works when you click through and vote on the polls every Saturday. The girls’ rounds go up first, shortly after midnight, with the boys following about twelve hours later. 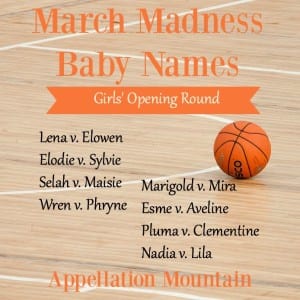 A match-up brought to you by the letter M: Marigold v. Mira

Polls stay open through the morning of Friday, March 11th. Check back for the results on Saturday, March 12th. You’ll be able to vote in the semi-finals then, too!