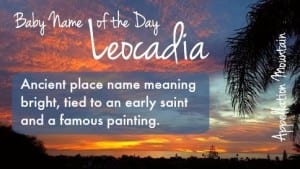 I’ll never forget the place I found this name: the Museo del Prado in Madrid, Spain.

Our Baby Name of the Day is Leocadia.

The Greek leukos means bright, clear, white. In Greek myth, Leucadius was the son of Icarius of Sparta.

The island of Lefkada in Greece was originally known as Leucas, possibly after Leucadius. Because a temple to Apollo once stood there, the Greek god was sometimes known as Apollo Leucatas. You can still visit its ruins today.

That puts Leocadia in the same category as Lawrence and Delphine, given names derived from ancient places. For a more modern twist, there’s a beach community called Leucadia in southern California.

Saint Leocadia was martyred during the Diocletian persecutions in 304.

She was a slave in the ancient city of Toledo who refused to renounce her faith. In prison, she prayed to leave such a cruel world, and miraculously died before she was tortured.

A church was established in Toledo with her name by the 400s. Her relics travelled from Spain to Belgium and Rome before being returned to the city in 1587.

Doubtless the saint is the reason the name remains in use.

Goya outlived his wife, and then suffered from a lengthy illness, lost his hearing, and eventually, his position as court painter, too.

He retreated to the countryside with his much younger housekeeper, Leocadia Weiss. She was his model, and may have been his lover.

The work to the right is part of a series known as Goya’s Black Paintings. It’s usually called La Lecoadia, or sometimes just Una Manola – The Seductress.

The artist probably never intended the work to be displayed – it was painted directly on the walls of his house.

Leocadia: Beyond Church and Canvas

A tiny town called Santa Leocadia sits on the border between Spain and Portugal, with a church dedicated to the saint dating to at least 1264. The name has been heard in Brazil, too. There’s a street by the name in Rio de Janeiro.

I’ve found women by the name who answered to Lee, Lola, and Lily. Other potential nicknames. include Cady, but Leo, Leda, and Dia.

The name may be rare, but it works in Spanish as well as Isabella or Sophia, has an on-trend Leo- beginning and -ia ending. Leocadie would fit in with all of those three-syllable, ends-in-y or -ie names for girls.

Overall, if you’re after a rare, elaborate name for a girl, Leocadia is one to consider 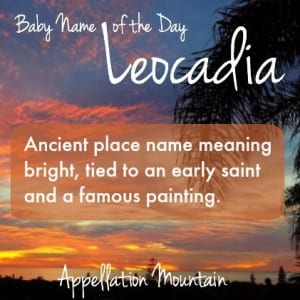 What do you think of Leocadia? Would it wear well in 2015?