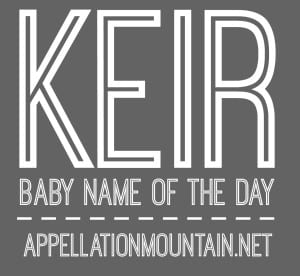 Looking for a short name for a son, one that is both unexpected and rich with history? Look no further!

Thanks to Ashley for suggesting Keir as our Baby Name of the Day.

The first time I heard Keir, I assumed it was related to Kieran.

And it kind of, sort of, maybe is.  Except Keir is usually Scottish to Kieran’s Irish roots.  Which means there’s more than one possible origin and backstory for this name.

James Keir Hardie – known exclusively by his middle name, which was his mother’s maiden name – got his start as a coal miner in his native Scotland, quickly moved to union organizing, and then elected office.  Hardie was elected to Parliament in 1900, and was one of the founders of the British Labour party.

Whether it is spelled Keir or Ciar, the name rhymes with sheer and dear.  Ciar might not be intuitive, but I think Keir is pretty straightforward.

It’s also said exactly like kir, as in kir royale – the sweet French cocktail made with blackcurrant liqueur and white wine.  It was named for Felix Kir, the mayor of Dijon in Burgundy.  World War II destroyed Burgundy’s red wine grapes, leaving them with lots of white wine, and a need for novel uses. Necessity is the mother of cocktails!

There is some history of using Kir as a given name.  It’s the Russian form of Cyrus, and there’s an early twentieth century Romanian story called Kir Ianulea, named for the devil-protagonist of the tale.

As of 2013, 14 newborn boys were called Keir.  That’s many fewer than Kieran’s 469, or even Ciaran’s 80.  Then again, Kieran had young actor Kieran Culkin to help boost the name, and we’ve been mad about two-syllable, ends-in-n names for boys.

If single-syllable choices for boys are on the rise, this could be Keir’s moment.  Jack, Jace, Keir – the name stands out, but still fits in.

If you’re after something distinctive and different for a son, but want something with roots – especially Scottish roots – then Keir could be one to consider.

Do you think Keir could catch on?  Do you prefer Keir or Kieran/Ciaran?