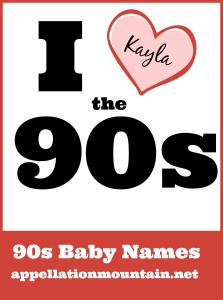 Take an obscure Hebrew name, add a blockbuster soap opera character … and ta da, one of the most popular names of the 1990s.

90s Week continues with Kayla as our Baby Name of the Day.

I first heard Kayla on NBC’s soap opera Days of Our Lives.  It’s probably the first place you heard Kayla, too.

Good girl Kayla Brady debuted on daytime television on January 1982.  Like many of her family members, she was a doctor, the daughter of Shawn and Caroline Brady – though she’s a nurse in those early seasons.

Miss Brady left the show briefly, then came back and fell into love with bad boy Steve Johnson – known as Patch thanks to his, well, eye patch.  Because he lost an eye in a fight with another Brady.

The pair became a supercouple, dealt with the trials and tribulations any soap opera romance demands, and generally pushed the show’s ratings into the stratosphere.

There are three possible histories for Kayla pre-soap opera:

And yet it is tough to argue that parents embraced Kayla in order to honor loved ones named Katherine or Michael.  It’s unlikely that over 4,000 families were looking for a stylish, but traditional, Hebrew name.

This is a name that was made on pure sound.  Kayla’s peak year was 1991, when she ranked #12, and was joined in the rankings by:

Kayla won’t age any worse than Linda or Barbara, Jennifer or Melissa – or many a name that was once heard everywhere for little girls.  Even as I write, those 80s Kaylas are starting families of their own, bringing this one into mom-name territory.

And who knows?  Maybe in another hundred years or so, Kayla will top the list of vintage gems ready for revival.

Do you think Kayla is one of the defining names of the 1990s?  Do you prefer Kayla, Kaylee, or Makayla?