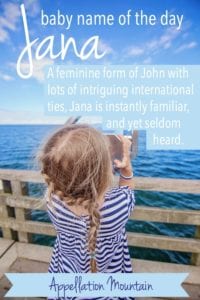 Jana counts as a cousin to at least two classic names. And lately, it’s back in the spotlight.

Thanks to Jana for requesting her name as our Baby Name of the Day.

Few names boast as much history as John. No surprise we find dozens upon dozens of variants. That includes feminine forms of the name. There’s good-girl Jane and saintly Joan; romantic Johannah and spunky Jessie. Travel the globe and there’s Zhanna and Sinead and Bevan and Juana, too. And that’s just a start.

The name can share John’s meaning: God is gracious.

A few other possible origins exist.

Some connect the name to the Xana or Anjana, a mythical creature found in folklore from regions of Spain. They’re usually gorgeous creatures, dwelling in forests or fountains, though stories differ. In some tales, they guard treasure or aid travelers. In others, they place their children in the cradles of unsuspecting homes, stealing the babies that live there.

That’s a long list of possible – and mostly positive – ties.

This name might feel traditional elsewhere, but in the US, it debuted in the Top 1000 in the 1940s.

What explains the name’s rise? Well, Janet entered the US Top 100 back in 1928, and became a Top 25 favorite from the mid-1930s well into the 1950s. Janice wasn’t too far behind, with names like Janelle and Jeanette riding the same wave of popularity.

No surprise to find Jana in their company. After all, two-syllable, ends-with-a names for girls have always had their place. Though, interestingly, they were out of favor in the 1930s and 40s. Linda, Martha, Norma, Glenda, Wanda, and Paula appeared in the 1940’s Top 100, along with the still-current Sarah, Anna, and Laura. But more tailored sounds like Carol, Nancy, Judith, Susan, Karen, and yes, Janet, dominated the era.

Then came the advent of Jenna and Jennifer.

Could it be thanks to reality television star Jana Duggar? She and her super-sized family first appeared on television back in 2004. Despite the spotlight, the years don’t quite track. Jana fell in use as the Duggar family rose to fame, and 2016 comes after their reality series was canceled. Now it’s her younger, married sisters who command most of the minutes of spin-off series, Counting On.

However, it could catch on. Unlike the 1940s, when it felt like an all-American alternative to chart-toppers like Janet and Janice, this time the name has a different vibe.

Like any short name that touches multiple cultures and languages, there’s potential for Jana to appeal to parents seeking to bridge different backgrounds.

It also feels every bit as short and straightforward as Emma or Ella. Plus, plenty of parents are all about the letter J, even as it falls from its former position as the most favorite first initial for children’s names. (Though J has long been more popular for boys.)

Still, it’s a nice stands-out, fits-in choice, one that reads as traditionalish, without being too tied to the past.

Readers, what do you think of Jana? What’s your favorite feminine form of John?