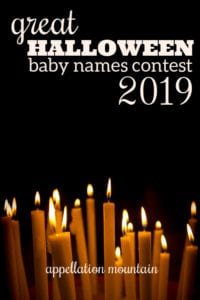 Your votes have narrowed down the field to two final names!

But before we get to the two beguiling finalists, let’s review the girls’ SemiFinals in the Great Halloween Baby Names Contest.

To recap, all of the names in this year’s showdown are drawn from Vampire Diaries and its two spin-offs, The Originals and Legacies. When it comes to picking favorites, though, it’s all about the names themselves, not the heroes or villains who wore them on the series.

The last round pitted three names against each other in each of two contests. The results? Not as close as I might have thought:

Neither name appears in the current US Top 1000, though they both sound like they could – maybe should! – rise in use in the coming years. With 108 girls given the name in 2018, Sybil is slightly more popular than Sabine, with just 64 births. But both feel exotic, glamorous, rare.

That makes them the perfect two finalists for the Great Halloween Baby Names contest 2019!

The winner is up to you now. Please vote: