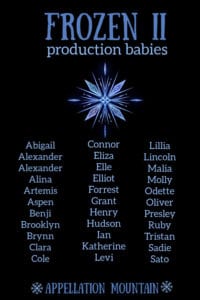 The Frozen 2 production babies have arrived!

If you didn’t manage to catch the movie during its theatrical release, good news. It’s now streaming on Disney+.

What are production babies, you ask?

They’re the children born to studio employees during the production of the film. The practice started at Pixar. As they’ve explained in interviews, it’s easy to remember family milestones by tying them to the particular movie in production. Adding their kiddo’s names to the credit cements a tie that’s already there in every family memory.

When Pixar was acquired by Disney, the practice migrated to their movies, too. And I’ve seen it in a few other animated features since then, too. (Appropriately enough, Storks from Warner Brothers included a list.)

So fire up your streaming device of choice. I’m assume you can already belt out “Let It Go.”

Which means this list is best read while singing along to “Into the Unknown.”

All together now: Don’t you know there’s part of me that longs to go …

Okay. Now back to the Frozen 2 production babies.

It’s a shorter list than some – just 33 newborns. Maybe that’s because a Disney animated film, massive production that it is, still comes together more quickly than a Pixar movie? The last list I compiled, for Toy Story 4, came in at 40 babies. Or is it just a fluke?

Like any list of production babies, these range from the most traditional to some truly daring picks.

For girls, Frozen 2 production babies includes Abigail, Katherine, and Clara. On the boys’ side, there were two newborns named Alexander, plus Henry.

These are the names that almost make my classic list. For girls, there’s Molly and Eliza. And the boys’ list includes Levi, Ian, Benji, Grant, and Oliver.

I’ll put two more names in this category: Tristan, though I think it might fit better with bold, dramatic names from legend, and Brynn, though I tend to think of it as a spare, almost unisex pick.

Two trends that just won’t quit are names borrowed from the natural world, as well as place names. Frozen 2 production babies include girls Aspen and Brooklyn. On the boys’ side, there’s Forrest and Hudson.

Malia, the name of Barack and Michelle Obama’s older daughter, rose in use sharply following her father’s election the presidency. But it was trending before, a flowing, liquid name that’s considered the Hawaiian equivalent of Maria.

Speaking of liquid names, I always expected Lillia to take off, but it remains relatively uncommon.

Goddess name Artemis could be big today, but it’s yet to really catch on.

Odette tends to attract lots of positive attention with baby name fans. But that hasn’t translated inot mainstream popularity – yet.

But the biggest surprise was Sato. It’s a Japanese name, used for both genders. And it has plenty of appealing meanings – enlightenment, wisdom, and clever are just a few. It’s a surname, too – roughly the Japanese equivalent of Smith.

That’s it for the Frozen 2 production babies. Do you have any favorites on this list? 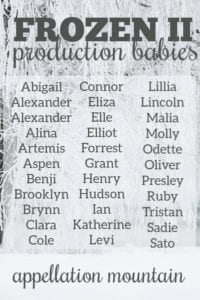 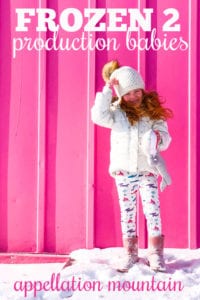