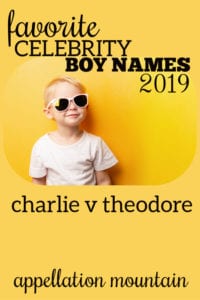 We started with eight great boy names, all mainstream(ish) favorites chosen by celebrities for their sons over the past twelve months.

Your votes have narrowed it down, from eight to four to just two finalists. And now? It’s time to pick a winner. Last year, Sebastian came out on top. This year? Before we get to voting, let’s look at the results from the last round of competition.

That means our two finalists are:

Charlie – This high profile birth announcement belongs to Lauren Conrad and husband Will Tell. They welcomed Charlie Wolf this year. If it sounds familiar, it’s because Zooey Deschanel gave the same name to her son in 2017. And, of course, Charlie is a go-to favorite for parents everywhere.

Theodore – This year’s Theodore comes from NBC News’ Richard Engel and wife Mary Forrest. The couple welcomed son Theodore Forrest in August. Long neglected, Theodore has become one of the most stylish of the classic boy names.

I think one of the tricky parts of this contest is this: both names are traditional favorites, but one is the casual version, while the other is the name in full. It might be more fair to set Charlie against Theo, or Theodore versus Charles … but that’s not how the contest works!

So, now it’s your turn to vote for your favorite celebrity boy name of the year!

Which would you choose?

Voting stays open until the end of the week. Check back next Saturday to see which names win!