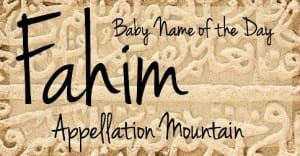 Looking for a smart name for a son? Here’s one that might appeal.

Thanks to Kenneth for suggesting Fahim as our Baby Name of the Day.

Arabic names often sound accessible in English, and yet they tend to be pretty rare. Layla – choose your spelling – is one exception. Could others follow?

Fahim seems like it would be a great Arabic-English crossover, too. I’ve read that it means intelligent or scholar, from the word fahm. The closest translation that I’ve found in a dictionary is “understanding,” as in the ability to understand concepts.

Arabic is written in a different alphabet, so no surprise to find multiple transliterations. Faheem is the slightly more phonetic version, and Fehim seems to be most common in Turkey.

The name appears as both a given name and a surname. There’s a New York Times journalist named Kareem Fahim, and a handful of others with the surname.

Fehim Zavalani was a writer and activist, and part of the Albanian National Awakening in the early twentieth century. He worked to oppose Ottoman rule and to preserve Albanian culture. One of his most important contributions was working to standardize the written version of Albanian by standardizing the alphabet. He also served as editor of a major Albanian-language newspaper.

Not exactly household names, but maybe you’ve heard of this next one: the rapper T-Pain. He released his debut album in 2005, and has earned Grammy Awards for collaborations with Kanye West and Jaime Foxx. He’s also a producer. If he still doesn’t ring any bells, this might: his biggest success to date was producing Flo Rida’s “Low.”

Okay, so it’s a little at odds with the scholarly image that the name might otherwise project.

T-Pain’s real name is Faheem Rashad Najm. He’s also featured on “All I Do is Win,” which I think is quite the modern anthem for sporting events. So even if you haven’t heard of him, betcha you’ve heard one of the catchy songs he’s worked on over the last few years.

Fahim: And Khalid, Jamal, and Hakeem

Faheem Rashad Najm brings us to another phenomenon: Arabic names used by African-American parents. In the wake of Civil Rights and black pride, parents looked for names that reflected some aspect of their lost roots.

Names drawn from African languages, like Kwame and Jabari, found favor. So did names that felt just a little bit different: the French Andre, the Italian Dante. And Arabic names like Jamal and Hakeem became popular, too.

It can be one of those topics that goes in ugly directions. But I think any parent will identify with the central question: does this name feel like a fit for my child? And there was absolutely a moment where traditional names, especially those rooted in European languages, started to seem like a mismatch for African American parents, while Arabic names felt like better choices. 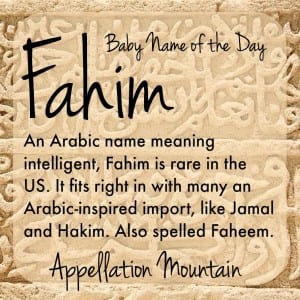 Arabic influence is also felt in Spain. I found Fahim listed on this Spanish baby names website, along with the suggestion that if you liked the name, you might also like Blaise and Kenji. Eclectic, global, and unexpected – I think that’s a good description for all three names.

Overall, Fahim has a great meaning and a handsome, accessible sound.

The name is quite rare. It’s been in sparing use in the US since the 1980s, but was given to just five boys in 2014. The name peaked in 2003, when there were 25 newborn Fahims. Feminine form Fahima is also heard.

And yet, if you’re after a choice that honors Arabic roots with an unexpected sound, Fahim is every bit as wearable as Top 1000 favorites like Jamal.

What do you think of Fahim? Does it seem like a possible crossover name?