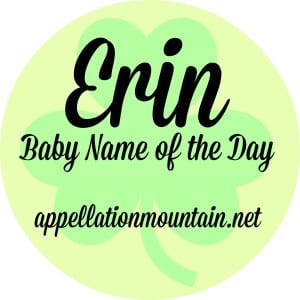 She’s a kelly green heritage choice that caught on for girls in the 1950s.

Thanks to Virginia for suggesting Erin as our Baby Name of the Day.

Erin is a poetic place name.  In Irish Éire means Ireland; Éirinn and Éireann are the dative and genitive cases of the name.

Just like Caledonia refers to Scotland, Britannia to England, and Columbia to the United States of America, Erin became a romantic way to refer to Ireland.

It’s not completely crazy to borrow Erin for a girl’s name.  The original name of the country comes from the goddess Ériu.

Turn back the clock to 1798 and this was far more serious business, a revolutionary cry.

Inspired by revolutions in the US and France, the Irish rose up against British rule in May of that year.  The British crushed the rebellion, imposing martial law and executing traitors to the crown.  The Acts of Union followed in 1800, creating the United Kingdom of Great Britain and Ireland. Erin go bragh translates to Ireland forever, and over time it has mellowed, from a defiant shout to a simple statement of affection for all things Irish.

Irish influence on baby names has been tremendous in recent decades, from Brian to Aiden.  Some of that is down to families of Irish descent preserving their heritage – though many Irish-Americans have been in the US for years.  The South Boston Parade for Saint Patrick’s Day dates to 1737.

Erin seems to have been a preferred term to refer to Ireland in mid-century America.  A 1953 television movie was called The Harp of Erin – as in the symbol on the flag above – but I can’t find any plot details.  The Irish Catholic fraternal organization the Knights of Equity established a women’s auxiliary in 1954.  They’re known as the Daughters of Erin.

A handful of women had been given the name earlier, but she first breaks into the US Top 1000 in the 1940s.

Small screen notables propelled her to even wider use:

Erin was also boosted by tailored Karen – a Top Ten name in the 1950s – and rapidly rising Irish heritage choice Megan – in fact, I’d bet that Erin and Megan are a pretty common set of sister names.

Today, she’s out of vogue, though at #273, she’s definitely not of use.  But we like our place names straight-up in 2014: Brooklyn, London, and even Paris are currently more popular. Alec Baldwin and Kim Basinger used Ireland for their daughter’s name in 1995.

Respell her Aerin, and she’s the Estee Lauder heiress, a spelling still much less popular than the original.

Overall, Erin’s tailored feel and place name status should qualify her to be a stylish choice circa 2014.  But after years of steady use, this one is drifting into mom name territory – poised for a comeback, given another generation or three.