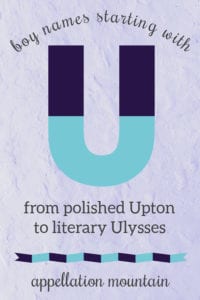 Boy names starting with U make for a very short list indeed!

The letter U comes dead last in terms of popularity. Just three boy names beginning with U rank in the current Top 1000, and only one of them makes the Top 500 – barely.

But there are others. Not many, but a handful of appealing possibilities come from the twenty-first letter of the alphabet.

It’s mostly English that neglects the letter. Some of these hint at international roots, and indeed, other languages make better use of the sound.

Some names, of course, could be spelled with an U instead of another vowel. Orson seems a little more accessible than Ursino. Alrich could just as easily be Ulrich.

But in most cases, it seems like the U version is the less popular of the possibilities.

And so this list of boy names starting with U may be brief, but it’s rich with some intriguing options.

BOY NAMES STARTING WITH U

It’s best known as the Italian form of Hugh – meaning heart or mind – but Ugo also appears in Igbo as a name meaning eagle.

It can be masculine or feminine and short for lots of longer names, including several German classics.

The Spanish form of Ulysses, slightly sparer than the English version.

A Germanic name rich with history, but seldom heard in the US.

A name borrowed from a towering literary hero Ulysses – Odysseus in Greek – suggests an adventurous spirit.

Humbert is pretty much extinct in English. But the Italian Umberto remains a dashing import.

Feminine in Japanese, Umi is used in small numbers for girls in the US. But it’s also the name of a legendary Hawaiian king.

Eight popes have been named Urban, a brief and tailored choice that’s rare today, but not unknown.

An Old Testament name meaning “God is my light,” Uriah benefits from our love of names like Elijah and Isaiah.

Cousin to Uriah, Uriel currently stands as the most popular U name for a boy in the US.

In the key of Ugo and Umberto, this is another Italian U name. In this case, Ursino comes from the Latin ursus – bear. Orson is the closest English counterpart – but it’s nearly as rare.

The Lin-Manuel Miranda musical In the Heights introduced us to Usnavi de la Vega. His name came from the boat his immigrant parents saw on their arrival to New York – US Navy.

What are your favorite boy names starting with U? 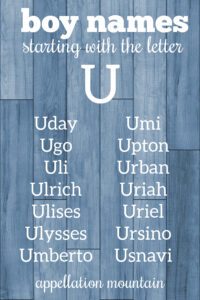 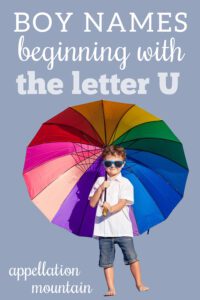