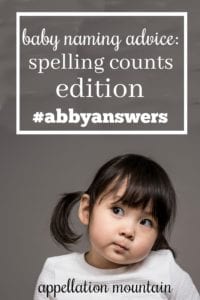 Yup, after a quiet summer, Abby Answers: Your Most Pressing Baby Naming Dilemmas, Resolved is back! We’re talking about the decisions that vex parents during the naming process. They’re the ones debated on baby naming forums, discussed around the kitchen table, argued over text with our friends.

Today we’re talking about a favorite of mine: now that you’ve found a favorite name, how should you spell it?

Confession: I used to be one of those spell-it-right types. But the more I learned about all things onomastic, the more I realized a hard truth: there’s really no such thing as a correct spelling for the overwhelming majority of names.

If you’re like me, I’m guessing there are a few quirky spellings that speak to you, even if you know they might prove confusing in real life. (What are mine, you ask? I’ve long loved Alicyn, and lately I’m all about Xoë. Yes, with the accent.)

All of that means that I think there are good reasons to choose non-standard, slightly outside the mainstream spellings. And I think it’s pretty tough to argue that there are correct and unchanging spellings that must be used!

There are lots of reasons why we have multiple possible spellings, and I’ve written about them before:

I mentioned in the video that dominant spellings – the most common one – do change. Looking at the current girls’ Top 100 list:

On the boys’ side:

Plenty of names have more than one spelling in the current US Top 100. Think about:

Expand the list to the Top 250 or even Top 1000, and spelling choices abound!

To some this might feel chaotic, even problematic. But standardized spellings are relatively novel, and many of these variations have history aplenty.

If it’s impossible to settle on a correct spelling, what’s a parent to do?

What’s your take on the topic? Have you ever struggled to choose a spelling for a favorite name? Are there certain names that you like only if they’re spelled one specific way?