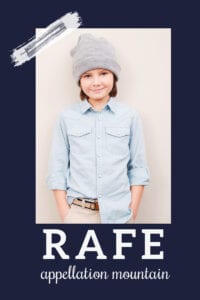 Thanks to Josephine for suggesting our Baby Name of the Day.

If you know actor Ralph Fiennes – and since the celebrated actor has starred in everything form Shakespeare to Harry Potter, you probably do – then you might assume that Rafe is just the phonetic spelling of Ralph.

The Old Norse and Germanic Radulf – wolf counsel – filtered into England with the Norman Conquest in 1066. It became Ralf and then Rafe in everyday use. The pronunciation remains familiar in British English today.

But Americans have been spelling it Ralph, and pronouncing it like Ralf – for centuries. Think of Ralph Waldo Emerson, Ralphie in A Christmas Story, or Ralph Kramden of The Honeymooners.

And while there are exceptions, Rafe reads a little dashing. After all, Fiennes is quite the leading man. But Ralph? It’s down-to-earth. Accessible. Maybe even a little bit homepsun.

And then there’s Raphael. And Rafael and Raffaello. The Hebrew name means “God heals.” But the most famous bearer of the name was probably Renaissance artist Raphael Sanzio, known by his first name only.

The artist inspired one of the Teenage Mutant Ninja Turtles, too – the one with the red mask, if you know your heroes in a half shell. That makes the name broadly familiar across the generations.

But while this traditional name is broadly used across Europe, it’s relatively rare in English. Rafael ranks #247 in the current US Top 1000, but that reflects its status as a Spanish crossover. Raphael comes in at a relatively chilly #514.

It also shortens to Rafa and Rafi. Though Rafi is also an Arabic name meaning sublime, so not every Rafi is a Raphael.

Here’s the thing: the baby name Rafe has never been given to even 100 boys born in the US in a single year.

But looking at the US Top 1000? It takes over 200 births to make that list, and names like Rogelio, Cedric, Vance, and Maxton were all given to around 220ish boys in the year 2020.

Rafe is quite rare.

Then again, at least some of those boys named Rafael and Raphael are almost certainly answering to Rafe. After all, Nate isn’t in the Top 1000, either, but it’s heard often enough, thanks to years of boys named Nathan and Nathaniel.

The spelling Raife is even rarer, and again, Rafe might be short for surname name Rafferty – but that’s never cracked the US Top 1000, either.

All of this makes the baby name Rafe a little bit of a surprise.

It fits right in with brisk boys, like Jack and Cole and Kai. But it’s also every bit as romantic as longer choices, like Sebastian and Caspian – even when it isn’t a nickname for Raphael. And the name’s status as Ralph’s British cousin cements it in history, the kind of name you’d expect to hear in a historical novel.

The result is a name that feels traditional, but edgy and cool, too.

If you’re after something distinctive and different, but not too different, Rafe seems like a perfect choice – daring, dashing, brief and complete.

What do you think of the baby name Rafe? 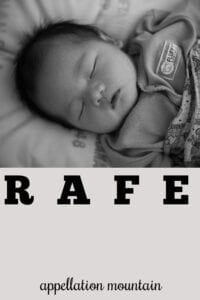