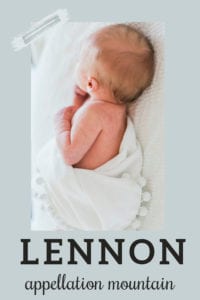 A few possible meanings attach to the surname that became Lennon.

It’s also possible it comes from a name meaning sweetheart, which would put Lennon in the company of Carys and Amoret.

Or perhaps it means blackbird.

That last one could be very appropriate.

But what Lennon really signals to most of us is musical legend.

Born in Liverpool, England in 1940, John Winston Lennon formed his first band while still a teenager. By 1960, he and friend Paul McCartney had formed The Beatles.

Along with George Harrison and Ringo Starr, they’d become one of the most influential and widely-known musical acts of all time. It’s hard to find anyone who doesn’t recognize their music.

In 1964, they landed in the US and the British Invasion began. Their music grew in complexity, incorporating more influences and styles.

Oh – and remember blackbird, one possible meaning of the name? The Beatles released “Blackbird” in 1968. Though it has nothing to do with Lennon’s name; instead, McCartney was inspired by the civil rights movement.

First, his songs resonate today. “Imagine” remains one of the most performed songs, often listed as one of the best singles of all time.

And, of course, Lennon died at the age of 40, assassinated by a deranged fan. Central Park’s Strawberry Fields stands as a monument to his legacy.

That was in 1980. And yet, despite the global outpouring of grief, and many of Lennon’s songs returning to the top of the popularity charts, the baby name Lennon didn’t catch on.

It bumped up in use just the tiniest bit.

Gallagher often talked about his admiration for the late singer, so there’s more mystery how he chose the baby name Lennon.

Twenty-first century baby naming has been dominated by surname choices. While there’s plenty of history behind such choices, traditionally a surname came from your family tree. Or maybe it honored a personal hero.

In many ways, the baby name Lennon fits in that latter category.

It’s hard to argue that surnames belong to a particular gender. Before there was John Lennon, The Lennon Sisters were regulars on The Lawrence Welk Show. The original quartet was a household name in the 1950s, and three of the sisters still perform today.

But Lennon started out trending masculine.

The numbers flipped in 2014. One possible reason? Lennon & Maisy, a sister singing duo who achieved fame after starring on Nashville, beginning in 2012.

Today, the name is given to nearly double the number of girls as boys.

It’s hard to predict what comes next for Lennon. But in many ways, it fits with tailored, surname names we’ve embraced for our daughters. It sounds at home with Top 100 favorites like Harper and Quinn.

Of course, it also sounds right with so many masculine choices.

Perhaps the baby name Lennon is best considered a true unisex choice, a name in the key of Peyton, Jordan, or Rowan. It may be more popular for one gender, but it really belongs to both.

With deeply meaningful musical connections and a stylish sound, it’s easy to imagine the baby name Lennon continuing to catch on.

Would you consider the baby name Lennon? Do you like it better for a son or a daughter?