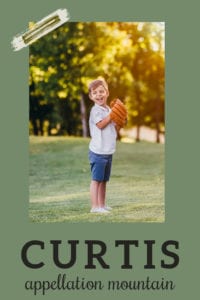 The baby name Curtis represents two names, merged into a single trend-resistant pick It might just be the perfect stands-out/fits-in choice.

Thanks to FE for suggesting our Baby Name of the Day.

It comes from the German Conrad, meaning brave counsel.

Listening to the German pronunciation, it’s tough to hear. But languages change over time. And there’s a clue in the history books. The tenth century bishop of Constance, the future Saint Conrad, was recorded in Latin as both Conradus and Curtius.

The Dictionary of Medieval Names from European Sources confirms that Cord, Cuno, and Curt were all associated with Conrad over the ages.

So how did Kurt pick up an -is ending?

It didn’t. This is where the second name comes in.

Also spelled Curtiss and Curtice, the baby name Curtis started out as a surname. It comes from the Old French and Middle English curteis – courteous. Maybe sometimes it was a nickname for someone not terribly refined, given in jest. But other times, it may have recognized a positive character trait.

In any case, we know that Curtis was in use in English by the time Shakespeare wrote. There’s a servant to Petruchio in Taming of the Shrew by the name.

We don’t often think of the baby name Curtis as a surname, probably because it has appeared in the US Top 1000 every year since the list began in 1880.

Curt has always been less popular, but its fortunes tend to follow Curtis. The same is true for K spellings Kurt and Kurtis, too.

An eclectic mix of famous figures answer to the name. Athletes, actors, and fictional characters have all been born with the baby name Curtis. It’s the real name of rapper 50 Cent.

Nirvana frontman Kurt Cobain and MTV journalist Kurt Loder might be familiar to parents today, but they’re far from the only ones.

But ask a grandparent and it’s a different Curtis that might come to mind.

Born Bernard Schwartz, actor Tony Curtis became a household name in the 1950s and 60s, but his career spanned six decades. Handsome enough to play a heartthrob, but talented enough to earn an Oscar nomination, Curtis starred in smash hits like Some Like It Hot and Spartacus.

While his film career declined after the 1960s, he remained a staple on television for many years.

His fame coincides with peak use of the baby name Curtis.

In many, Curtis fades into the backdrop. It’s the last name of Ponyboy and Sodapop in The Outsiders.

Speaking of Kurt, singer-songwriter and guitarist Kurt Cobain became an international star as the frontman of Nirvana. They helped redefine 1990s alt rock and grunge, with smash hits from their breakthrough “Smells Like Teen Spirit” to “Come As You Are” and “All Apologies.” When people think of Seattle in the era, it’s often Cobain’s voice that provides the soundtrack.

He took his own life in 1994, and was posthumously inducted into the Rock and Roll Hall of Fame in 2014.

It’s hard to overstate his influence, but in one respect he didn’t make an impact. The baby name Curtis, along with Kurt, declined steadily during the 90s.

Maybe the mega-fame of men like Tony Curtis and Kurt Cobain help explain why this family of names feels so trend-resistant.

The baby name Curtis fits with s-ending picks like Hayes and Wells. And yet it feels more like an under-the-radar pick, a brother for Malcolm.

It’s easy to imagine the baby name Curtis wearing well on a son in nearly any era, a polished choice that feels both familiar and nicely unexpected today.

What do you think of the baby name Curtis?