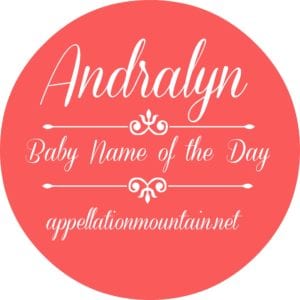 She’s a straight-up smoosh name with roots in the 1970s, and a twenty-first century sound.

Thanks to Alli for suggesting her daughter’s name as our Baby Name of the Day: Andralyn.

We tend to think of Andrew as a classic, and that’s fair – the name has been worn by princes and presidents, a perennial member of the US Top 100 for boys.

Andrew didn’t become really popular until the 1980s, the first decade the name entered the US Top Ten.

While Andrea is headed into mom name territory today, there’s still a lot of life in the Andrew names.  Other feminine forms include:

Andralyn smooshes the abbreviated Andra with the popular -lyn ending.  There have been stylish names ending in -lyn throughout the twentieth century, from Marilyn to Madelyn to Kaitlyn to Brooklyn to Evelyn.

But there’s something else appealing about Andralyn.  While the name is clearly intended for a girl, there are echoes of gender neutral names like Addison and Aniston in Andralyn.

Other similar smooshes seeing some use include:

Does it work as a name?  Mix and match often falls flat – is Haelle pronounced like Hailey or Hallie or Hayelle?

That’s the beauty of -lyn.  Paired with nearly any two-syllable given name, -lyn is an easy addition.

While the -lyn spelling is most common overall, -lynn and -lynne are possibilities, meaning that no just-add-lyn name is exempt from spelling questions.

Andralyn also fits with our growing interest in Ann- names.  First came Annabelle, a vintage charmer back in vogue thanks to her -belle ending.  Now we’re hearing Annalise – choose your spelling, though this is the most popular – as well as Annie, Anne, Annika, and Marianna on the rise.

All of this makes her a modern rarity, one that is unlikely to crack the US Top 100 – or even 1000 – anytime soon, but remains perfectly wearable in 2014.

What’s your favorite ends-with-lyn name?  Do you prefer -lyn, -lynn, or -lynne endings?