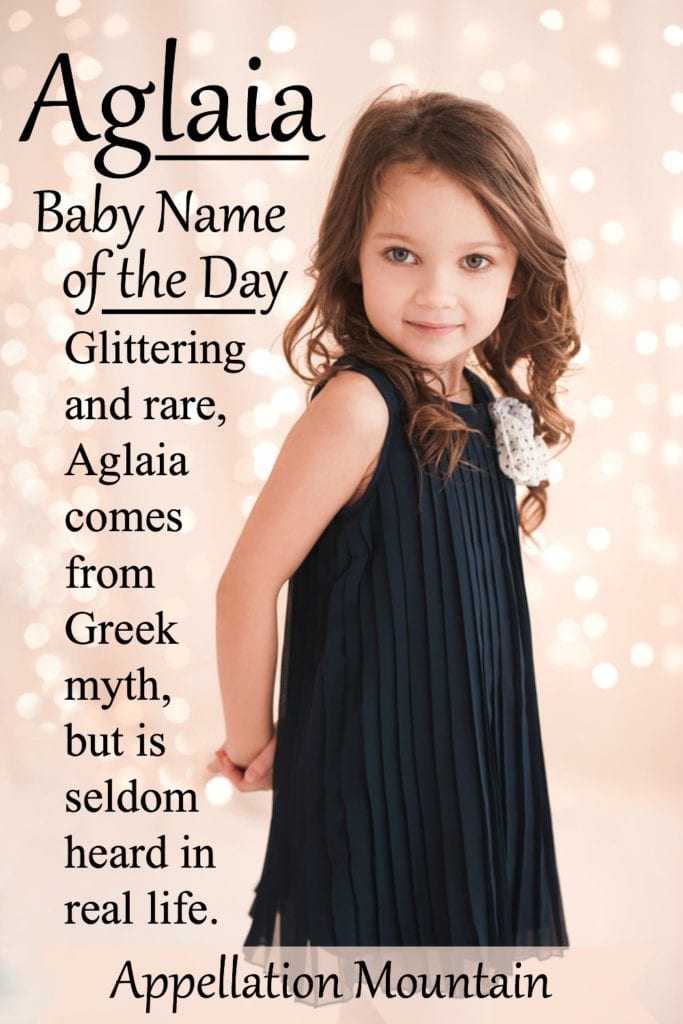 Looking for a glittering, rare name for a daughter? Graceful Aglaia might be the answer.

Thanks to Corey for suggesting our Baby Name of the Day.

This name comes directly from Greek myth. Aglaia serves as one of the three Charites or Graces. The youngest of the sisters, daughters of the god Zeus and the goddess of good order, her name translates to beauty.

The Graces served as Aphrodite’s attendants, and were associated with celebration and enjoyment.

A handful of other characters throughout Greek mythology answered to the name, including Aesclepius’ daughter, who personified the glow of good health.

Aglaia: So Lovely as a Tree

I’ve known that Aglaia was a minor goddess for years, but somehow I’d missed this name’s nature tie-in. It refers to a genus of trees, part of the Mahogany family. They’re most found in Asia and the Pacific, so perhaps that explains why this name isn’t up there with Willow and Rowan.

Or maybe Aglaia is rare because none of the Aggie names have fared particularly well in recent years.

It’s surprising, though, because Aggie fits right in with names parents love – all of the Maddies and Addies, Abby, Maggie, and more. If Aggie caught on, it might encourage parents to consider other ways to get to Aggie.

Besides the figures from Greek myth, the name was also worn by:

Aglaia: Rarity Ready for Wider Use

Even if you’re an avid gardener, there’s a good chance that Aglaia isn’t on your radar. And even devotees of myth might struggle to name the Muses or the Graces or the Fates.

This name is just plain rare. The last year it was given to five or more girls was way back in 2006 – and then the number was just six newborns.

And yet, I think this name works, and here’s why:

So why don’t more parents consider this rarity? I suspect it has to do with sound. uh GLAY uh sounds a little – okay, maybe a lot – like ugly with a lay-uh tucked on. As if it could be mangled into Uglia.

That’s enough to give anybody pause.

And yet, if you’re a bold name after something completely unexpected, Aglaia deserves a second look.

What do you think of this name?