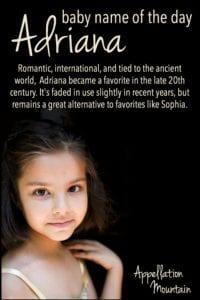 Adriana comes with tons of history, but was seldom heard until the mid-twentieth century.

Our Baby Name of the Day was inspired by C.’s daughter.

Adriana: From the Map

This name begins its story on the map, in Northern Italy. The Etruscans called it Atria or Hatria, a port town near the Adriatic Sea. A river shared the same name.

Settlers lived there as early as the twelfth century BC, and classical Atria dates to sometime in the sixth century.

As for the name’s meaning, theories abound. Some suggest it comes from adur – water or sea, in an ancient language. I’ve come across “rich” and “black” or “dark” as possible meanings, too, though some of the suggested origins post-date the city’s name.

A second city was named for the first, and today it’s known as Atri, in Abruzzo.

The most famous figure to wear a form of this name was born Publius Aelius Hadrianus – though you know him as the Emperor Hadrian.

He succeeded Emperor Trajan in 117 and was known for his extensive travels. Even more, he’s remembered for building a wall across Britannia, to mark the northern limits of the Roman Empire.

While the name appears in plenty of history books, it has never charted in the US Top 1000.

Instead, Adrian – hold the H – has a long history of use as a place name, and a given name, too. Six Popes have worn the name, along with a handful of saints and other historical figures.

Feminine forms abound. Adriana appears in Italian and Spanish, as well as Polish and English, with slightly different pronunciations depending on your language.

Shakespeare chose this name for a character in The Comedy of Errors. Adriana is a dutiful wife in a madcap tale of mistaken identity.

That means that we’ve been hearing this name in English for centuries. Indeed, it appears in US Social Security records steadily, but in small numbers. But for years, this would have been quite rare.

Outside the English speaking world, it’s a different story. Artists, singers, actresses, and more answered to the name across Europe for centuries.

What explains the change?

This name comes with two common spellings, with the -ana and -anna endings equally valid.

Adriana entered the US Top 1000 in 1960, with Adrianna following in 1977. A slow and steady rise brought the name into wider use.

Adrienne – the French form of the name – appeared in the US Top 1000 way back in the nineteenth century, and Adrianne debuted in the 1940s.

One possible explanation: Adrian gained in use rapidly for boys during the 1960s.

Or maybe an adaptation of Shakespeare’s comedy gets credit.The Boys from Syracuse preserves the character name Adriana. While the dates don’t line up neatly, it did start a fresh off-Broadway run in 1963.

1976 gave us screen legend Rocky, including wife Adrian. Yup, that’s right – the movie used the masculine version of her name. Officially, the character’s name is Adrianna, but that’s not widely known.

Another possibility: the similar sounding, but unrelated, Andrea gained quickly during the 1960s.

My best guess is that Adriana, and later, Adrianna, simply picked up where Adrienne left off, following the rise of the masculine form.

Adriana: By the Numbers

The single ‘n’ spelling remains far more popular than Adrianna. The former ranked just outside the Top 100 from the 1990s until recently; it remains a Top 250 pick.

With an international vibe, Adriana is a sister for Sophia or Francesca. The name feels glamorous and romantic, but still very wearable. It makes a familiar, but not overused, choice for a daughter today.

Just like many vowel-intensive names, it’s possible that you’ll meet two girls with the name who pronounce it very differently. But overall, it’s a portable possibility right at home in our modern age.

What do you think of Adriana? Do you prefer it spelled with one ‘n’ or two?