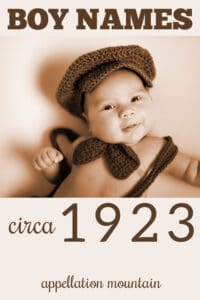 Wondering what 1923 boy names were on top?

It turns out that plenty of today’s familiar favorites were popular picks one hundred years ago, too. But mixed in with upstanding classics like James and John, we find some unexpected gems. A few of these names – both from the 1923 boy names’ Top 100 and beyond – sound downright 2023.

Let’s look at two groups of names. First, the surprisingly stylish. The outliers, rising in use, but still not mainstream. They’re the names i would’ve been blogging – and we all would’ve been talking about – 100 years ago.

Then let’s look at the Top 100, a mix of the familiar and the wait that name was THAT popular, too.

Why does it matter?

In naming, we often talk about the 100-Year Rule.

After all, if you’re having children today, your parents’ names are probably something like Mark and Julie, or maybe Scott and Nicole. Your grandparents’ names could be something still dated – Ron and Shirley, perhaps. But it’s also possible that you’ll find some vintage gems, like Betty and George.

Even farther back, it’s a good bet that your great-grandparents’ names trace back about 100 years. And that century brings us back to names like Arthur and Evelyn, Frank and Rose. They’re the vintage gems we’re all after for our children circa 2023.

Depending on pronunciation, Basil is either a brother for Rosemary and Sage, or a delightfully antique British throwback.

A surname name related to the French place name Orsay, it may trace its roots all the way to the Greek word horkos, meaning oath.

A mini name big on style, Ike can be short for Isaac, or possibly stand on its own. It sounds old school and fresh at the same time. The name’s popularity predates former President Dwight “Ike” Eisenhower, who rose to fame during World War II.

The name means “lion of a man,” from the Greek. But we know him as a tragic Romeo of the ancient world, who lost his life swimming across the Hellespont, a straight that separated him from his beloved.

Popular with German royals, and literary thanks to James Joyce, Leopold could succeed in the 2020s because we’re wild for lion names, from Leonardo to Leovanni.

There’s something surprising about Theron, though nicknames like Theo and Teddy could make it readily accessible. It comes from a Greek word meaning “to hunt.”

Smooth, sophisticated Vaughn only recently left the US Top 1000. But no question it was more popular in the past. Today it fits with timeless choices like Graham.

Along with Wylie, this name can come from evergreen William, or a place name with a meaning like “willow clearing.” It’s nicely masculine, but also comfortably modern, a surname we’re not using but easily could be.

What are your favorite 1923 boy names? 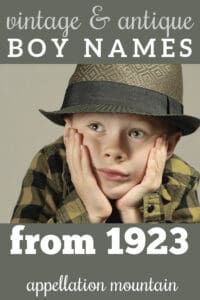 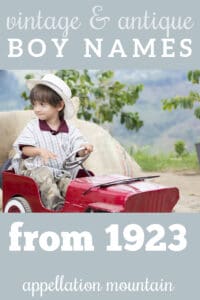