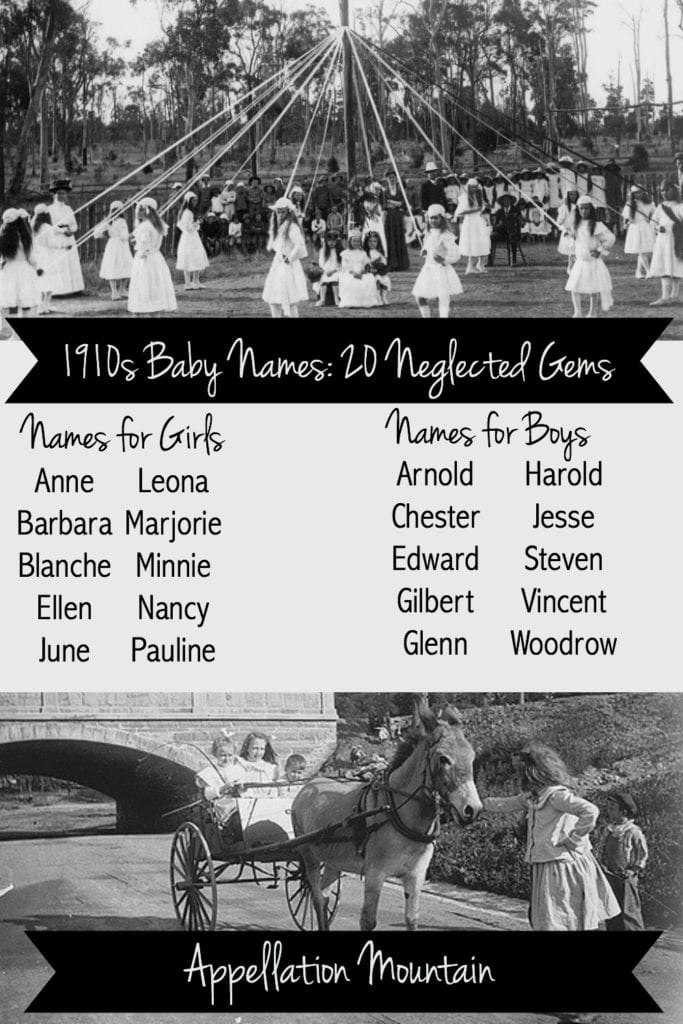 1910s baby names range from the traditional Mary and John, to these twenty neglected gems.

This is the fourth installment in this series. You can read all of the Neglected Gems posts here:

The names are chosen according to a simple formula. The first part is numeric: the name was in the US Top 100 – or almost the Top 100 – for the decade of the 1910s, as defined by the US Social Security Administration. (You can read the official list here.)

Scan the official list, and you’ll recognize many of the names: William and Henry, Ruby and Alice.

But many of the names are overlooked today, making them the neglected gems of 1910s baby names. I’ll admit this part is completely based on my opinion. You may see some of these names – maybe all twenty! – and think, 1910s baby names they may be, but gems? Not so much.

But I suspect that at least some of them will strike you as overlooked – names that could wear well in 2016, if only we remembered to use them.

As these lists have evolved, I’ve imposed an additional rule: No fair repeating names from earlier lists. So these are twenty brand new neglected gems.

Now, on to my picks for very wearable 1910s baby names!

Anne – Anna was more popular in the 1910s, but Anne wasn’t far behind. Neither was Annie. But let’s talk about Anne for a minute. Anne of Green Gables makes it literary. In the Bible, Saint Anne is the mother of Mary. There’s more than one Queen Anne – though perhaps the best known, the former Anne Boelyn, ended tragically. Between books and history and faith, there are plenty of reasons to consider this name. But from a style perspective, it’s especially appealing – slim and trim, a name as spare as Claire, and yet somehow much less expected. Just Ann is even more minimalist. Ann wasn’t too far behind Anne in the 1910s, but today neither names ranks in the Top 500. Traditional, yes. Rare? Equally true.

Barbara – There are so many names that would be great in 2016 – if only they weren’t huge before. Barbara peaked in the 1940s, and was a Top Ten name from the 1910s through the 1950s. Factor in the Barbie Doll, and the name feels absolutely everywhere. But not the playground. A mere 320 girls were named Barbara in 2015. You’re more likely to meet a Zendaya. Worried it is just too dated? Nickname options range from Babette to Bebe to Bobbie, but I suspect Barbara would be just fine in full.

Blanche – Is Blanche ready for a comeback? Part of me still hears Blanche and thinks A Streetcar Named Desire, or Golden Girls. And yet, the other names from those works are the height of fashion: Streetcar’s Stella or Golden’s Sophia. So why not Blanche? It’s as French as Genevieve, as tailored as Jane. But it was in the Top 100 for the 1910s, and is completely out of the Top 1000 today.

Ellen – In medieval England, Helen lost the ‘h’ and became Ellen. It’s been in use ever since. While a few Ellens have been very glamorous – think of Edith Wharton’s Ellen Olenska in The Age of Innocence – there’s a good-girl quality to Ellen that makes it a sister for Caroline or Alice. Ellen DeGeneres and her eponymous talk show keep the name in the public eye, but it’s become very rare for children. It tumbled to #705 last year.

June – June almost doesn’t belong on this list, because the June names? Are as hot as a mid-summer’s day right now. But let’s look at the numbers: in 2015, June came in at #280. That’s still kinda-sorta under the radar. So June makes the list of 1910s baby names, with the caveat that, if you’re reading this list in 2018, you might want to triple check and see if June is now in the Top 100 again.

Leona – There was a point in the 1980s when Leona was very Helmsley. The real estate tycoon was known as the Queen of Mean thanks to her exacting standards. Despite significant wealth, she was also the queen of cheap, often refusing to pay vendors – and taxes. That last bit landed Leona in jail. Fast forward to 2016, and the Reagan Era scandal is all but forgotten. Her name makes an intriguing feminine spin on the so-popular Leo, and also shares sounds with Elena. It’s up slightly in recently years, returning to #683 as of 2015.

Marjorie – Marjorie is a medieval English spin on Margaret, by way of Margery and marjoram. It rose rapidly through the 1910s, peaked in the 1920s, and plummeted towards obscurity by the 1990s. Today it’s slowly making a return – Marjorie was up to #799 in 2015. It’s a three-syllable ends-in-y name for girls, less expected than Emily, as retro as Dorothy.

Minnie – She’s Mickey’s faithful companion, and for years, the only famous Minnie we could name. Then along came Minnie Driver. Factor in our affection for retro nickname names like Sadie and Millie, and suddenly Minnie doesn’t feel so mousy after all. 68 girls were named Minnie in 2015, which is an increase from just a few years ago – though still many fewer than in the 1910s.

Nancy – Nancy rhymes with fancy, but the name has a sensible and capable vibe. Credit young detective Nancy Drew, a beloved fictional character – and reinvented – over the generations. Or maybe Nancy Sinatra’s anthem These Boots Are Made for Walking. Or Blake Lively’s newest on-screen Nancy, a surfer who plays cat and mouse with a great white shark in a summer blockbuster. Nancy ranked #820 in 2015, but was among the most popular of 1910s baby names, peaking a few decades later in the 1940s.

Pauline – The Paul- names for girls are making a comeback. Vin Diesel named his 2015-born daughter Pauline in tribute to the late Paul Walker. Mike Myers named his daughter Paulina the same year. While Pauline is not back in the Top 1000, it is showing signs of greater use. It could pick up where names like Genevieve and Madeline leave off. And since the name peaked in the decade, it truly belongs on the list of 1910s baby names.

Arnold – Famous Arnolds, like actor-politician Schwarzenegger and golfer Palmer, haven’t been enough to keep this name in use. Like Pauline, Arnold peaked in the 1910s. Like many 1910s baby names, Arnold still feels slightly grandpa. And yet, it’s a strong, traditional choice for a son. It comes from Germanic elements meaning “eagle power” and has been worn by saints as well as other notables. If Arthur can be revived, why not Arnold?

Chester – Chester may be a spokesperson for crunchy cheese-like snack products today, but way before the invention of Cheetos, there was this was a Roman settlement in Britain. And then a surname, and eventually a first name – as in former US president Chester Arthur, and former Admiral Chester Nimitz. Nickname Chet makes it jazzy, though Chet Baker was born a Chesney. Chester hasn’t been in the US Top 1000 since the 1990s, but it might fit in nicely with Theodore and Carter alike.

Edward – How can it be that classic Edward feels out of favor? It entered the Top Ten in the nineteenth century, stayed there through the 1920s, and remained in the Top 100 until the 1990s. It’s still hovering around the 150 mark today. And that’s just it. While James and William remain evergreen, Edward is every bit as classic, but slightly less current in 2016. It’s a great opportunity if you want a traditional choice for a boy.

Gilbert – Gilbert is a gentlemanly name, all Gilbert Blythe to Anne of Green Gables fans. (It’s only right that Anne and Gilbert are both on the list of 1910s baby names. After all, the original novel was published in 1908, with sequels following.) It’s also a name in sharp decline, given to just 208 boys in 2015, down from its peak in the 1930s. That timing suggests that Mr. Blythe’s character boosted the name.

Glenn – Glenn is a short name for boys, and a nature-related one, too. Glenn Miller makes it musical; John Glenn makes it daring. And yet both famous bearers also make it dated. It didn’t peak until the 1950s, so this feels like a Boomer name. A popular character on The Walking Dead hasn’t been enough to revive Glenn, and yet, it seems like it could fit in with popular names today.

Harold – I might be the only one rooting for Harold. Harry is big in the UK, and Hal fits right in with Jack. So why not Harold? It’s regal and traditional, a name with history galore. Family tradition has kept the name on the fringes of the US Top 1000, but I think it might one of those so-uncool-it’s-cool names.

Jesse – It’s easy to dismiss Jesse as a trendy name that’s on the way out. And that’s half-right. Jesse has been in an out of favor, reaching the US Top 100 from the 1880s through the 1930s, and again from the 1970s until 2005. But Jesse is also the Old Testament father of David, an impeccable Biblical choice meaning gift. Jesse is part 1910s baby name, part-dad name, and part classic that doesn’t always get the recognition it deserves.

Stephen – Steve is your accountant, or maybe your dentist. But Stephen? Pronounced with an ‘f’ sound instead of a ‘v’, Stephen is the new Jordan. He’s the NBA star leading the Golden State Warriors to victory. Appropriately, the name means “crown.” The question is whether Steph Curry’s achievements are enough to revive the name and change our ideas about pronunciation. Of course Stephen – pronounced like Steven – has potential, too.

Vincent – Strong, traditional Vincent peaked in the 1910s, and had a long history of use. It left the US Top 100 in the 1990s, but it feels just right today. The meaning “conquering” makes Vincent an alternative to more modern strong names for boys. Famous Vincents range from van Gogh to Vaughn, and Entourage’s Vincent Chase is a familiar fictional character to most parents naming a baby today. Despite all of these positives, Vincent has recently left the US Top 100. While it’s more common than many names on this list, I still think it’s a neglected gem amongst 1910s baby names.

Woodrow – Future US president Woodrow Wilson was born Thomas Woodrow Wilson in 1856. His middle was his mother’s maiden name. He became president of Princeton University in 1902, governor of New Jersey in 1910, and was elected president in 1912. Woodrow had been gaining in use as Wilson’s career expanded; in 1912, the name rocketed to #46 – an astonishing game for a name that was unranked back in 1906. Woodrow belongs with 1910s baby names, to be sure, but is it ready for revival? It’s a surname name ending with an ‘o’ sound, comes with friendly nickname Woody built-in, and feels nicely nostalgic, so I say yes. Just 59 boys were given the name in 2015, though, so it remains rare – which can be a good thing.

Which 1910s baby names are your favorites? Do you think any on this list are likely to make a comeback?