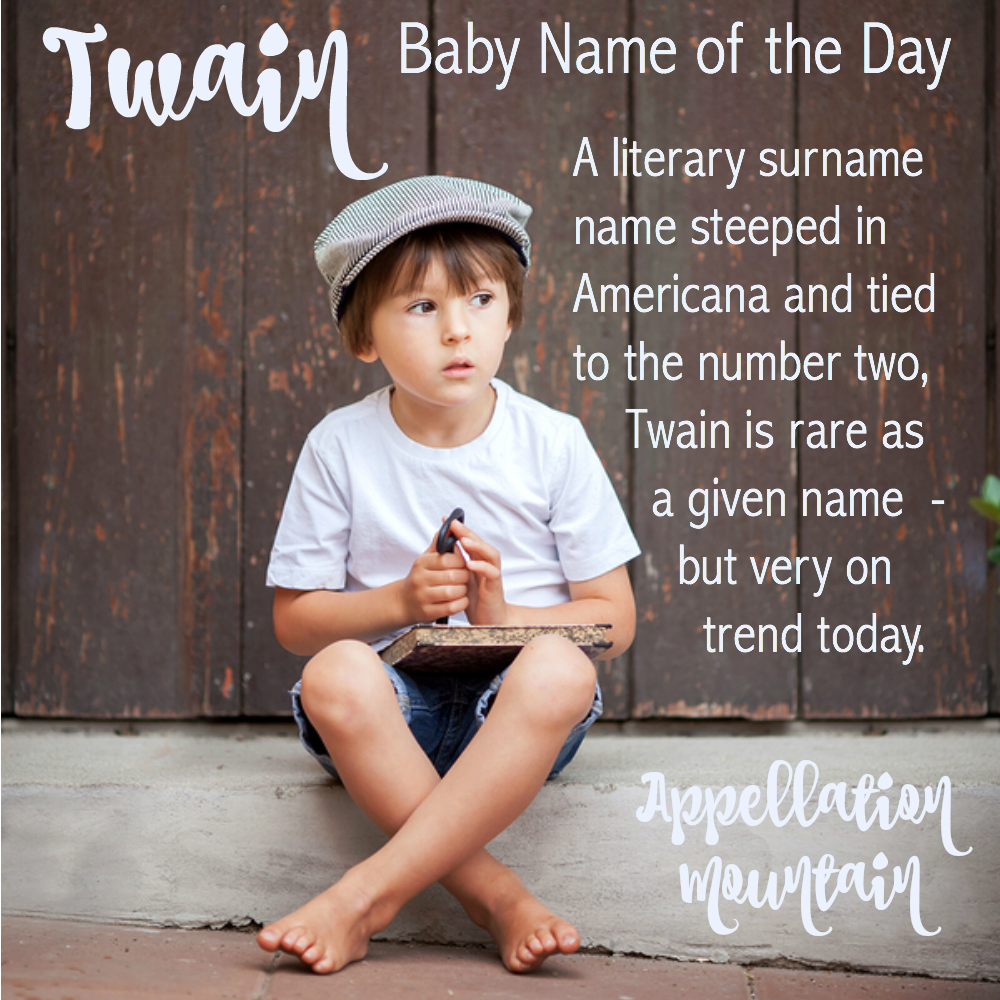 Our Baby Name of the Day was inspired by our Americana names for boys list.

Born in 1835, Clemens worked as a riverboat pilot – more on that in a minute – a typesetter and newspaperman.

Several of his stories – including Huck and Tom’s tales – were set in his native Missouri and on the mighty Mississippi River.

The author explained that children growing up on the Mississippi River all saw steamboat pilots as the most prestigious of all jobs, requiring a mix of skill and an ability to read to river. In 1857, Clemens became an apprentice. Two years later, at the age of 23, he became a licensed steamboat pilot. The job didn’t last long, but it inspired his well-known pen name: Mark Twain.

Twain simply means two, from the Old English twegen. It might have been lost, except that the word appears in the King James version of the Bible, as well as poetry. And it’s useful in spoken language, for distinguishing the number two from too and to.

“Never the twain shall meet” serves as an elaborate way to describe two things – or people, or groups – that have nothing in common.

By 1800, the word was also used in the US to indicate a depth of two fathoms. This takes us back to the Mississippi River once more.

Twain: On the Mighty Mississippi

Two fathoms happens to be the depth at which a steamboat can safely pass through a river. It works out to about twelve feet. It’s still pretty shallow.

Clemens may have borrowed the name from a fellow steamboatman; it’s a story the writer himself repeated several times.

Mark, of course, is a Biblical name with a long history of use. While data for the year of Clemens’ birth isn’t available, by the late nineteenth century, Mark was a Top 200 name. It still is, so it’s reasonable to assume that Mark Twain sounded like a given name to all who heard it.

Regardless of the inspiration, it clearly ties the writer to his roots.

Twain: By the Numbers

So the name means two, and it’s used as a surname – at least sometimes. Singer Shania Twain also answers to it.

Has Twain ever been bestowed as a given name?

The name appeared as a given name in US data a handful of times, beginning in 1959. The last year it was given to five boys was 2011. It’s never been given to ten or more boys in a single year.

That makes this one rare, though not completely unknown.

With names like Ford, Knox, and Ridge in the US Top 1000, it’s easy to imagine this choice fitting right in with all of those short, distinctive-sounding surnames. We only need one appealing television character to take this one from obscure to mainstream.

What do you think of Twain? Does it work as a given name?