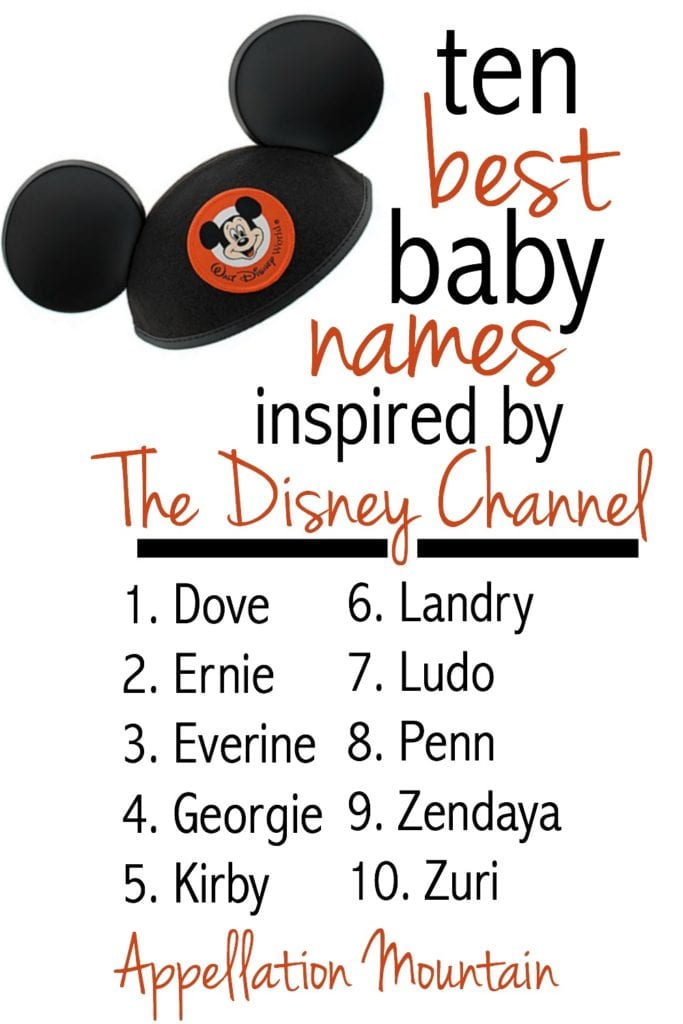 What are the best Disney Channel names?

After all, future parents are tuned in to the channels. From Disney Junior – designed for kids two and up – to the teen-friendly Disney XD, there’s no shortage of characters and rising stars with fascinating names.

Some of these are already climbing up the rankings, while others might be long shots to catch on. Or maybe they just need another twenty years, until today’s Disney Channel viewers grow up and start naming babies of their own.

I haven’t seen every one of these shows, but because my children are in the right age group for Disney Channel viewing, I was surprised at how many of these were instantly familiar.

Here are my ten picks for the best Disney Channel names of 2016!

Dove – Young actress Dove Cameron was born Chloe Celeste Hosterman. Her stage name is far more memorable, inspired by a childhood nickname given to her by her father. Dove is currently starring on series Liv and Maddie, playing twin sisters with very different personalities. But she’s even better known as not so rotten-to-the-core Mal from The Descendants. This is among the most unusual names on the list. Just 17 girls were named Dove in 2015.

Ernie – We’ll talk about K.C. Undercover later on this list, but I’m dazzled by the names given to two of the children. K.C. Cooper is a high school student whose parents happen to be spies. The series starts as K.C. joins the family business. Baby brother Ernie is a computer genius, but his parents are reluctant to get him involved. Top Chef winner Stephanie Izard recently named her son Ernie. Could it be the new Jack?

Everine – Everine isn’t a name at all. It’s a title. In Evermoor, Young Tara Crossley moves to the UK and discovers she’s the heir to a magical legacy. Tara is destined to become the Supreme Everine. Maybe it’s crazy inspiration for a child’s name, but Khaleesi is doing just fine. And Ev- names for girls are following Evelyn, Eva, and Everly into wider use. Maybe it’s an odd choice for the best Disney Channel names list, but I think it fits.

Georgie – Stuck in the Middle focuses on Harley, the middle sister in the Diaz family, which includes older sibs Georgie, Rachel, and Ethan, and younger sibs Lewie, Beast, and Daphne. We have yet to learn if some of the kiddos have formal names – let’s assume Beast cannot possibly be on his birth certificate. So maybe Georgie is really Georgia, but regardless, I love her sassy, retro name. It’s a great substitute for Sadie.

Kirby – Kirby Buckets is about a high schooler who wants to be an animator. His cartoons come to life in the series. Kirby is an unusual choice for a boy, but it’s been heard before. Emilio Estevez’s character in St. Elmo’s Fire was Kirby. It was a regular Top 1000 name until the 1990s. Could fans of the series bring Kirby back someday?

Landry – Another name borrowed from a Disney Channel star, Landry Bender plays Cyd on Best Friends Whenever. The series is all about a pair of BFFs – Cyd and Shelby – who can time travel. The character names on the series tend towards the outlandish – a teenaged Barry, plus twins called Bret and Chet. But Landry is a surname name with ties to a French saint. It’s currently in the US Top 1000 for boys and girls.

Ludo – A second name from Evermoor, Ludo is also found in Harry Potter. Both shows have something else in common. Despite being a Disney Channel series, Evermoor is filmed in the UK. Ludo has never cracked the Top 1000 in the US, but with o-ending names for boys in favor, could it make an appearance? Ludovic is a great formal version of the name.

Penn – This is the only name of an animated character to make the list, inspired by Penn Zero: Part-Time Hero. Penn, along with friends Boone and Sashi, has to save the world. Gossip Girl alum Penn Badgley gave the name a big boost. It fits with short, edgy names for boys, plus it has an Americana vibe thanks to Pennsylvania’s founder, William Penn.

Zendaya – Disney Channel star Zendaya – no last name necessary, thanks! – graduated from Shake it Up to K.C. Undercover, where she stars as high school student/super-spy K.C. Cooper. According to the actress, her distinctive given name is from the Shona language, and means “to give thanks.” Plenty of parents have fallen for the name, taking it all the way up to #801 in 2015. This definitely makes it one of the best Disney Channel names – if not for the actress, this one might be completely unknown!

Zuri – Move over, Zoe. The Disney Channel’s Zuri Ross has graduated from Jessie to summer camp spin-off Bunk’d. Played by scene-stealing actress Skai Jackson, the character is sweet, but sharp-tongued. It means handsome or beautiful in Swahili, and is also a masculine name. But lately it’s been rising quickly for girls, reaching #443 in 2015.

Do you agree with my picks for best Disney Channel names? Do you have any favorites I’ve missed?