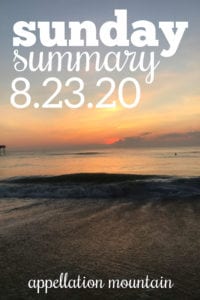 I recently found myself thinking about what dates a name. Many of us accept that our children’s names won’t be one-of-one. But we’d prefer to avoid a name that feels like Jennifer or Maureen – names that tie their child to a particular decade.

This is both easier – and harder – than it looks.

First, for a name to feel tied to a specific generation, it has to rise dramatically in use during that decade or two.

Jennifer qualifies. So does Ashley. Everly almost certainly will. But Emma may not. It’s ranked in the US Top 100 since 1993, and may very well remain in the Top 100 for another twenty years. Think about Emily. It feels traditional, and I know lots of 20-something and 30-something Emilys. But also a teen Emily and a tween Emily, too, plus I still see it in birth announcements. It feels traditional. Not at all surprising. But trendy and fleeting? Nope. Tied to a decade? Not especially. About the same number of Emilys were born in 1980 as 2018. After all, Emily Dickinson and Emily Post, anchor the name firmly across the ages.

A mix-and-match sound contributes, too.

Nothing sounds quite like Jennifer. But dated names often belong to an entire class of names that has fallen from favor. Maureen, for example, fell along with Arlene and Darlene. It’s why all of the -aiden and -aylee names will likely feel cemented to the early 2000s, even if the individual name wasn’t wildly popular.

But what really puts a name over the line? Pop culture ties.

A great many names get their start with a television series or celebrity, only to quickly move beyond their original reference. Others, though, feel so tied to a pop culture moment that they’re almost doomed to feel dated. Britney Spears wasn’t the first Brittany/Britney by a long measure. And yet, her superstardom helps pin the name to the year 2000, give or take a decade.

The bottom line? Any name can trend – become more popular – but a relatively small percentage of names will ever be perceived as especially trendy.

So, yes, if your kids are named Sophia, Theodore, and Evelyn, I can probably guess that they’re somewhere under the age of twelve right now. That’s because all of three of those traditional names have trended. But that doesn’t mean they’ll be perceived as trendy or fleeting. And, over time, the names’ classic status is likely to soften others’ ability to guess their age. Harper and Jaxon, on the other hand? I’d guess those will remain fairly era-specific favorites.

What do you think? What makes a name feel dated – or timeless – to you?

If you get the weekly AM newsletter, you’ll know that I’m crushing on Hildegard. Not for me, exactly, but for a super-intelligent friend of mine who’s due in just a few weeks. And now Kate at Sancta Nomina profiled the name – ha!

It’s (almost certainly) not gonna be Hildy, but I’m excited to learn the name Katie Perry and Orlando Bloom choose for their daughter. My interest in celebrity baby names has dimmed a bit in the last year or two. I mean … what could top Beyonce’s three children, or so many Kardashian not-quite-name names? But Orlando named his first born (with ex Miranda Kerr) Flynn Christopher, a name that I just flat-out love. So I have high hopes!

Some gorgeous substitutes for Sophia, courtesy of Bree’s Beauty of Names. I’m so drawn to Carina. (Which again, almost certainly won’t be the name Katie and Orlando pick, because it’s a Pirates franchise name. But still.)

A fascinating look at names ending with i and how they’ve changed over the years. The big take-away? Now that Lori and Terri are grandmas, it’s their grandsons getting the i-ending names.

It’s been a while since I liked to British Baby Names’ birth announcements and they’re as wonderful and distracting as ever. Rory, Rowan, and Mimi Eloise Rose! 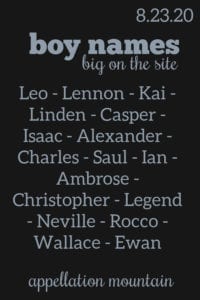 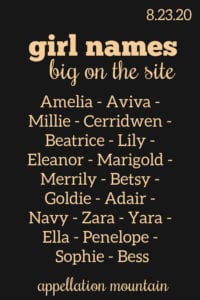