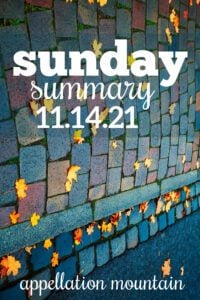 I watched the Amazon Prime van circling my neighborhood the other day. It made me think about – what else? – names.

The level of mockery that that greets a new baby named Pirate or Hortense or Bravery can be intense. And I get it – those are extreme names.

Except … we live in an age where standardization, on a global scale, seems more and more normal. Those Amazon trucks bringing us box after box? They’re bringing the same things, from the same manufacturers, more or less, to us all.

Names that stand out feel like a quiet act of rebellion. A way to assert our specific, true-to-ourselves qualities and preferences. It’s as if we’re screaming “yes, my socks and my side tables and wine glasses are all mass produced and identical to millions of others, but I’m still me. And I’m going to teach this baby the importance of independence, too.”

The forces of global commerce, of standardization, of efficiency pull us in one direction. And we tug back, just as hard, to assert our individuality.

I think that’s a good push-pull, a tug-of-war worth fighting.

Even if it results in the occasional eyebrow-raising name for a kid.

Why don’t parents consider choosing a non-traditional surname for their children? As I’ve said before, we considered a different approach when we got married, but ultimately went the the most conventional route. I’m completely content with our choice … but I dropped a complicated, hard-to-spell and pronounce surname for my husband’s fairly straightforward one. And, of course, it was a decision we made jointly – which also matters. There are lots of possibilities, though. I’ve written about them here.

An excellent point from Emma: unisex is not the same thing as gender-neutral. One is a style; the other is a statistical reality. You can perceive Reese and Cameron as unisex. I would agree! But the data tells us that the overwhelming number of children named Reese are girls, while Cameron belongs to the boys. This can change – and maybe it will – but if you’re naming a child today, it’s good to know what the numbers say. (And I love Emma’s point that this allows parents to have their cake and eat it, too – knowing that Payton will probably always be recognized as female, even though the style suggests otherwise.)

Switzerland’s top names list fascinates, because it is broken down by parents’ language. Two big takeaways: first, the dominant language group dictates the #1 name … but some buy-in from other language speakers matters, too. But second? A name that crosses language boundaries probably fares better than one specific to just French or German or Italian or Romansh. After all, even the Romansh names feel accessible in the other languages.

A reminder of how incredibly powerful names are … And how withholding a name is equal parts impractical and dehumanizing. (Found via Clare’s excellent Scoop.it page, Name News.)

Ending on a much less serious note … will the new Disney movie launch the name Mirabel? Or Mirabelle? She’s the hero at the heart of Encanto, a musical adventure rich with magic. Many of the -belle and -bella names are slipping, but Mirabelle feels like a promising next generation choice.

If you can’t get enough name talk, please consider subscribing to the Tuesday newsletter:

That’s all for today. As always, have a great week + thinking of you! 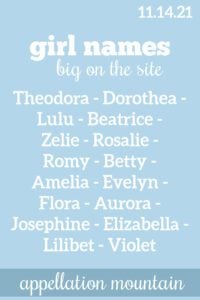 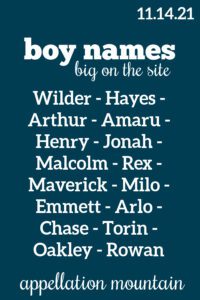