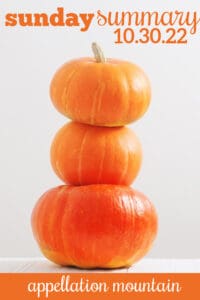 I’m a pretty heavy Ancestry.com user, though more for learning about names in the broadest sense than investigating my personal family tree.

Still, I’ve discovered some fascinating tidbits about my family history over the years, often because the site itself notifies me when a new set of records includes information about my ancestors.

A recent hint got me thinking:

What’s up with that outlier name?

My paternal grandmother was the youngest in a big family. Her older siblings mostly had names like John-called-Jack, George, Rose. But one sister, in the middle of the bunch, was named Olwen.

Olwen is a Welsh name, meaning “white footprint,” and it belongs to a beautiful maiden in an old legend. I’ve known this forever, a reminder of my family’s Welsh roots – even those roots are just a vague notion, rather than a specific detail.

But the most recent records hit? Revealed that her middle name was Vida.

In a family packed with names like Rose Elizabeth, what inspired such an unusual name?

Olwen was constantly misspelled. Olwyn and Olweyn appear in various official records. If it first belonged to an older relative, I’ve yet to find her referenced anywhere. (Though maybe I should do some more digging?) And Vida?

I have a few theories, but I don’t believe any of my living relatives are likely to know. (I plan to ask, of course.)

Are there outlier names in your family? Is it important to you to find names that go together, or would you consider giving one child a name that might eventually be considered an outlier?

I’m fascinated by the name singer Joss Stone and boyfriend Cody DaLuz chose for their second child. Shackleton Stoker DaLuz joins big sister Violet Melissa. I couldn’t find any comments about Violet’s name, but it’s a very current choice, not especially surprising. Shackleton, though? Is that a nod to the explorer Ernest Shackleton?  I kind of love it, and really hoping she shares the thinking behind such a distinctive choice. (Stoker is the singer’s real surname – she’s Joscelyn Stoker.)

Have you heard of Whimsigoth? Never in a million years would I say dark fairytale is my aesthetic, but I do love names like Jasper and Opal …

Rex, Roland, Monty … will any of these names old-school catch on in the US? They’re all from a recent edition of British Baby Names’ birth announcements.

Nancy has the longest list of names meaning blue that I’ve seen yet! You can read mine here, but she really dug deep to find some unexpected – and lovely – choices. (Though that reminds me … did we ever talk about actor Darren Criss’ daughter’s name? He and wife Mia welcomed Bluesy Belle earlier this year.)

Have you read Nameberry’s write-up on the biggest name trends for 2023? Always worth a read! 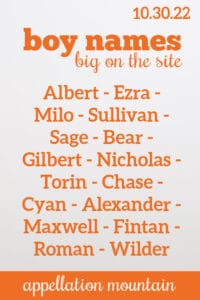 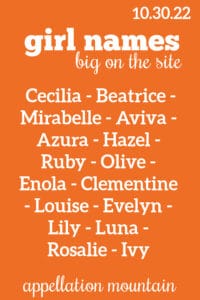